David Nutter studied music at the Conservatorio di Musica “Luigi Cherubini” and musicology at the Villa Schifanoia Graduate School of Fine Arts (Florence, Italy). He received his Ph.D. from the University of Nottingham in 1977. A specialist in 16th-century Italian music, his research interests include secular and sacred vocal music, and music for the lute.

His articles on aspects of music in 16th-century Florence, Venice, Verona, and Mantua have appeared in Renaissance Studies in Honor of Craig Hugh Smyth, Studi e problemi di critica testuale, I Tatti Studies: Essays in the Renaissance, Journal of the Lute Society of America, Trasmissione e recezione delle forme di cultura musicale (IMS Bologna, 1990), Claudio Monteverdi: Studi e prospettive (1996), Giaches de Wert (1535–1596) and His Time (1999), and Cantate Domino: Musica nei secoli per il Duomo di Firenze (2001). He is editor of works by Orazio Vecchi (A–R Editions), and by Claudio Monteverdi (Fazer Editions of Early Music) and author of entries in the New Grove Dictionary of Music and Musicians, and the revised edition of Die Musik in Geschichte und Gegenwart. He has been a Fellow at Villa I Tatti, the Harvard University Center for Italian Renaissance Studies, and has taught at the University of Kentucky and at Northwestern University.

danutter[remove-this-and-replace-with-at]ucdavis.edu
Back
This item appears in: 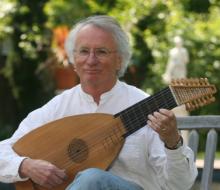