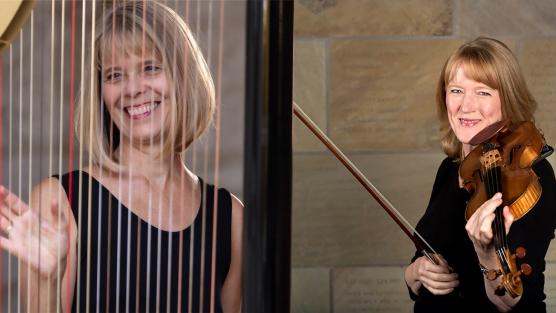 Louis Spohr: Potpourri on Themes from Mozart’s ‘The Magic Flute’
from Sonata Concertante for Violin and Harp, op. 114

Jolán Friedhoff relocated to Davis in 2008 after serving as assistant concertmaster of the Saar State Opera Orchestra (Germany) for twenty years. Since her return to California, she has performed as assistant concertmaster and concertmaster for several orchestras in the region, including the Sacramento Philharmonic, Modesto Symphony, Berkeley Symphony, and the Bear Valley Music Festival.  She also has been part of the Mendocino Music Festival orchestra, Sacramento Choral Society, and Sierra Master Chorale.

Kerstin Allvin has won numerous awards and competitions throughout her career as a concert harpist and has performed across the United States from Weill Recital Hall at Carnegie to the historic Carmel Mission in California.  She has frequented Japan, performing solo concerts at the prestigious Suntory Hall in Tokyo, the Nogi City Hall, and for Detroit/Toyota City’s Sister City Association.  She holds degrees, honors, and performance certificates from Indiana University, University of Michigan, and post-graduate studies with Jaqueline Borot, Honorary Professor of the Paris Superior