Kerstin Allvin has won numerous awards and competitions throughout her career as a concert harpist and has performed across the United States from Weill Recital Hall at Carnegie to the historic Carmel Mission in California.  She has frequented Japan, performing solo concerts at the prestigious Suntory Hall in Tokyo, the Nogi City Hall, and for Detroit/Toyota City’s Sister City Association.  She holds degrees, honors, and performance certificates from Indiana University, University of Michigan, and post-graduate studies with Jaqueline Borot, Honorary Professor of the Paris Superior Conservatory of Music.

Allvin has created and administered several groups in her career, including the Larson/Allvin Duo (flute and harp) the Arianna Harp Duo (two harps), and the Woodland Trio (flute, harp, and viola), touring the United States, Europe, Japan, China, Scandinavia, Canada, and North Africa. She was a guest artist of the city of Préfaille, France, teaching master classes in harp performance, breathing techniques, and yoga to music students from around the world, and performing concerts for the World Music Festival in Préfaille. She is an extra with the Detroit Symphony Orchestra and has been a guest principal harpist on tour and at home. Voted “Best Classical Instrumentalist” by the Detroit Music Awards, she is President of High Heel Records, Inc., producing and recording digital music for Internet and CD release nationally.  Her acclaimed release, “An Affair of the Harp,” contains the solo and chamber music of composer James Hartway receiving Detroit Music Award’s “Outstanding Classical Recording.” In both 2009 and 2012 her recording of “La Jardin Mouille” for the POLYMNIE label was voted the top number 1 piece broadcast by Radio Classique France for four consecutive weeks. She has recorded on the Naxos label.

Allvin is currently working with Detroit’s award-winning tenor saxophonist and Detroit International Jazz Festival President Christopher Collins. In spring 2015 they released a recording of original music for their “New Directions Quartet” with harp, woodwinds, bass, and percussion titled “Detours.” She has recorded with Stevie Wonder and Oleta Adams and performed with Josh Groben, Natalie Cole, The Three Tenors, and many others.

Allvin has received her Registered Yoga Teacher certification from National Yoga Alliance and has given lectures in breathing techniques, body awareness, and yoga to creative arts majors in universities and high schools throughout Metro Detroit. She has recently moved to the Sacramento area and maintains a busy teaching studio for harp at the Pease Conservatory, Sacramento, and the Music Institute, Roseville. She is adjunct faculty at California State University, Sacramento, and is lecturer in harp at the University of California, Davis.

kmallvin[remove-this-and-replace-with-at]ucdavis.edu
Back
This item appears in: 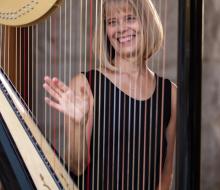