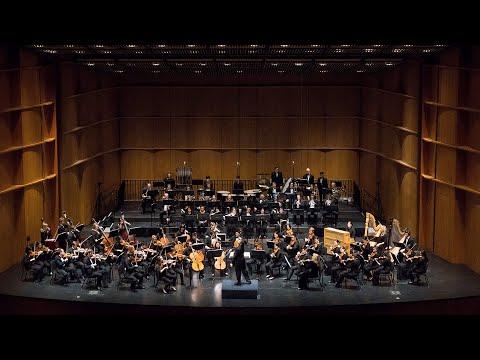 In its “Effects and Dances” program, Christian Baldini and the UC Davis Symphony Orchestra bring two thrilling orchestral pieces to the Mondavi Center in a short program starting at 8:00 pm.

The French-Argentinian composer Oscar Strasnoy’s “Kuleshov” piano concerto is a lively dialogue between the orchestra and the piano. This concert will be the first time the piece has been performed in the United States. It is inspired by the Kuleshov effect, an editing technique in film named after Lev Kuleshov (1899–1970), which demonstrates that the power of an image is not found in itself but in its context. In other words, one repeated image (or in this case musical motive) takes on different meanings based on the contrasting images (or in this case musical antecedents). Strasnoy asks, “are repetitive figures really repetitive? The music advances, whatever happens, through the action of time, but repetition does everything to make time stop.”

Soloist Ryan McCullough has been a featured concerto soloist with the Los Angeles Philharmonic, Toronto Symphony, and has appeared at major festivals and concert halls around the world. Originally from Northern California, he teaches at Cornell University and collaborates with many of today’s foremost composers.

In his most popular work to date, Peruvian composer Jimmy López Bellido’s “Fiesta! Four Pop Dances for Orchestra” draws influences from several musical sources including academic compositional techniques, Latin-American music, Afro-Peruvian music and today’s pop music. Rather than use any kind of synthesized sounds along with orchestral instruments Bellido imaginatively uses the full capabilities of each instrument in the orchestra.

This event has been archived and may contain content that is out of date.
Event
April 21, 2022 - 8:00 pm - 9:00 pm Christian Baldini
Mondavi Center for the Performing Arts, Davis, CA
View map
Faculty Profile