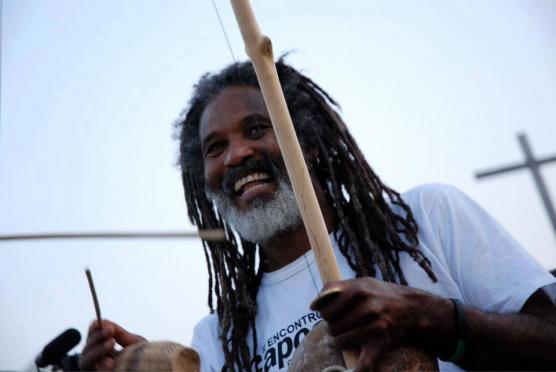 What is Capoeira?
Capoeira is a Brazilian art form that developed from combat games enslaved Africans brought to Brazil during the colonial period. It features dance, martial arts, music, songs, acrobatics, and, many would say, a particular philosophy. In performance practitioners form a circle where eight of them play instruments creating a groove that supports songs and the physical action. Songs are in Portuguese and the instruments are all percussion, with the exception of the berimbaus, three musical bows that lead the musical ensemble. Players take turns to come to the center of the circle in couples for the physical action. These physical encounters are known as jogos (games), neither a dance, nor a combat. During the performance, sometimes players seem to be dancing and other times to be fighting. This ambiguity is integral to capoeira and practitioners strive to balance the two. With a legacy linked to resistance and liberation from Portuguese colonizers and enslavers, many practitioners nowadays see capoeira as a symbol of cultural resistance and an instrument to educate and raise awareness about racial inequality. These views have been multiplied since the 1980s when capoeira became globalized.

Mestre Cobra Mansa is a recognized Capoeira Angola master based in Bahia (Brazil) who has extensive experience teaching and performing capoeira around the world. He participated in the revival of Capoeira Angola during the 1980s–90s in Bahia and now leads the International Capoeira Angola Foundation, one of the most influential capoeira groups in the world. Recently, he participated in the project Angolan Roots of Capoeira led by historian Matthias Rohrig Assuncao (University of Essex), which took them to Angola four times.