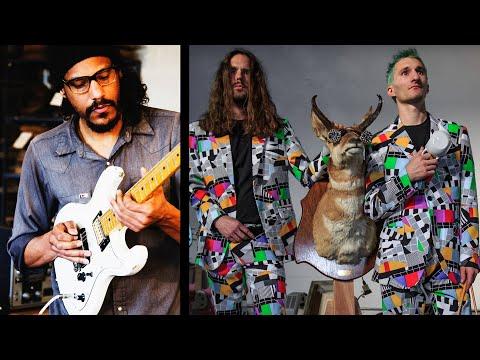 This trio performance, in many ways, represents the synthesis and evolution of our practices, exploring every facet of our collective musical beings, together in real time.

A collaborative trio featuring Zachary James Watkins and The Living Earth Show (TLES): The three artists are continuing a multi-year collaborative exchange that merges the musicians’ shared musical histories and vocabularies steeped in improvised, electroacoustic, experimental, and classical chamber music. Since 2016, the trio has created several new works by artists of color, curated by Watkins and performed by TLES in various workshops, and several full-length recordings.

The Living Earth Show (aka TLES, is guitarist Travis Andrews and percussionist Andy Meyerson) is a megaphone and canvas for some of the world’s most progressive artists. They are artists-in-residence at UC Davis for three significant projects in 2022 at UC Davis: “Music for Hard Times” (March 10), “Tremble Staves” (March 12), and “Affirmative Action” (May 5). The duet was listed in a recent write-up by the Washington Post in its “22 for ’22: Composers and performers to watch this year.”

Called “outstanding” by the San Francisco Chronicle, “transcendent” by the Charleston City Paper, and “a fully distorted perpetual motion of awesome” by I Care If You Listen, TLES is a premiere contemporary chamber arts ensemble in the United States. TLES received the grand prize in the SAVVY Chamber Arts Competition and runner-up in the open division of the M-Prize Chamber Arts Competition, and has commissioned and premiered over 60 new works by some of the most vital composers in the world. They have released three critically acclaimed albums, and have performed, lectured, and given masterclasses throughout the country.

Zachary James Watkins is a composer and electronic music artist. He will be visiting UC Davis’s music department several times over the 2021–22 school year, and working with graduate students in composition and creative writing for their collaborative performance work in late May 2022, titled “See / Hear / Say,” which is funded by the Davis Humanities Institute Research and Arts Clusters Grant.

Watkins has received commissions from Documenta 14, the Kronos Quartet, The Living Earth Show, sfsound, and the Seattle Chamber Players among others. His 2006 composition Suite for String Quartet was awarded the Paul Merritt Henry Prize for Composition. Zachary has performed in numerous festivals across the United States, Mexico, and Europe and his band Black Spirituals opened for pioneering Drone Metal band Earth during their 2015 European tour. In 2008, he premiered a new multi-media work entitled Country Western as part of the Meridian Gallery’s Composers in Performance Series. Zachary completed Documentado / Undocumentado (Moving Parts Press, 2017), a multimedia interactive book in collaboration with Guillermo Gómez Peña, Gustavo Vasquez, Jennifer Gonzalez, and Felicia Rice. Zachary has been an artist-in-residence at the Espy Foundation, Djerassi, and the Headlands Center for The Arts.