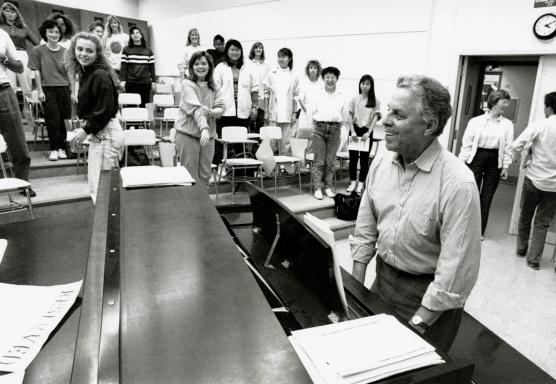 “I was in Al McNeil’s choir his last year,” recalled Laurie San Martin (B.A. music, ‘91), now professor and chair of the Department of Music. “As an undergraduate, you just didn’t want to miss out on working with him. He was a legend. He loved teaching music and his love was felt by all — his choir members and the audience.” In remembering McNeil’s significant contributions, the faculty of the Department of African American and African Studies jointly “recognize how it is built on the labor of past faculty, including McNeil, who kept it going through hard times, building the foundations for the next 50 years.”

During his tenure at UC Davis from 1969 to 1990, McNeil transformed the University Chorus from an occasional course to a full public performance group, and also created the Chamber Singers. While teaching at Davis, McNeil also found time to direct the Sacramento Masterworks Chorale and the Sacramento Symphony Chorus. Donna Di Grazia (B.A. ’83 and M.A. ’86 , music), now the David J. Baldwin Professor of Music and director of choirs at Pomona College, likened his lifelong impact on students to that of a successful sports coach. “You have your head coach who mentors a lot of players and assistant coaches, who then go off to change the lives of their players and coaches. Al had a far-reaching impact on a new generation of choral directors and arrangers.”

Raised in Los Angeles, McNeil’s parents were entertainers who occasionally hosted Duke Ellington, Louis Armstrong, Lionel Hampton, and others in their living room. McNeil began his professional career as an apprentice to the composer, actor, and arranger Jester Hairston. McNeil had a lifelong friendship with Hairston and many other famous artists of his day. Building on his work with Hairston, McNeil went on to prepare singers for 1950s films, including Porgy and Bess, Carmen Jones and The Land of the Pharaohs, subsequently forming an ensemble that would be readily available for film work. That ensemble became the Albert McNeil Jubilee Singers, which he founded and directed for more than 50 years. Throughout his career as an educator and performer, McNeil had a profound impact on the performance, preservation and presentation of African American spirituals.

McNeil believed in bringing the music he championed throughout the world. He took the Jubilee Singers on several tours throughout the U.S. and to 77 countries, taking part in U.S. Department of State’s Cultural Exchange Program three times. He also brought the University Chorus on tour with the UC Davis Symphony Orchestra to Australia, Tahiti and French Polynesia, and with the University Chorus on its own to what was then the U.S.S.R., China, Spain, as well as a six-country European tour that included stops in San Moritz, Paris, Geneva, Munich, Salzburg, and Vaduz.

After his retirement from UC Davis, he went on to direct the choir of the Congregational Church of Christian Fellowship in Los Angeles, and work as an adjudicator, guest conductor, and choral clinician. His many awards include a Michael Korn Founders Award for Development of the Professional Choral Art (1999), the American Choir Directors Association’s Lifetime Achievement Award (2004), and the California Choral Directors Swan Award (2014) for his outstanding contribution to choral music. He was given honorary doctoral degrees from Westminster Choir College (Rider University, New Jersey, in 2010), and from CSU Northridge (2003). He was on the board of directors for the Los Angeles Master Chorale, Chorus America and the Neighborhood Music School. He served two terms as member of the Choral Panel, the National Endowment for the Arts and was a Life Member of the American Choir Directors Association.

McNeil, reflecting back on his long career, once said, “I can’t believe they pay me for what I love doing so much!”

The University Chorus, Alumni Chorus, and the UC Davis Symphony Orchestra will perform Gustav Mahler’s Symphony No. 2 in memory of McNeil on March 12, 2023, at the Robert and Margrit Mondavi Center for the Performing Arts. Further details will be announced with an opportunity to gather together for those who knew McNeil.

The University Chorus and Chamber Singers of UC Davis gave a joint performance with the Albert McNeil Jubilee Singers at the Mondavi Center for the Performing Arts, Davis, California, on June 3, 2007. These selections are from the university’s recording archive. Listen here.

Remembrances can be emailed to department staff member Phil Daley via pedaley@ucdavis.edu. Donations can be made in McNeil’s memory to the Al McNeil Fund for Non-Western Performance at UC Davis.