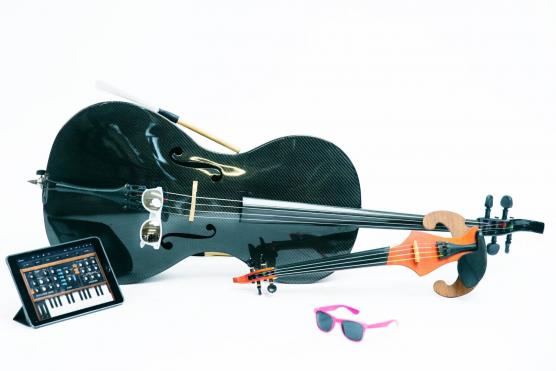 Warp Trio is an internationally touring cross-genre chamber music experience. Every chamber music program needs this kind of energy. While the beginning and ending compositions by Haydn and Brahms provided expected pleasures, it was the Warp Trio’s own jazz/tango/classical works that gave the concert a kick in the pants. —Cape Code Times

Described as “a talented group that exemplifies the genre-obliterating direction of contemporary classical music” (Columbia Free Times), Warp Trio is an internationally touring cross-genre chamber music experience. Reflecting the combination of Juilliard trained members juxtaposed with members steeped in rock and jazz styles, the one of a kind trio (that even has a fourth member!) can be seen performing classical works in prestigious halls on the same tour where they headline a standing room only show at a rock venue. In addition to their electrifying public performances, they have gained a reputation for their innovative educational workshops with students from grade school through university level.

Maintaining a busy performance schedule, Warp has performed hundreds of concerts across the United States, in addition to tours throughout The United Kingdom, Spain, Switzerland, Holland, Germany, West Africa, and the Caribbean. Highlights of recent seasons include headlining performances at The LEM Festival for Experimental Music in Barcelona, and the Omaha Under the Radar Festival, being featured guests at the 2020 MASA Jazz Festival in Abidjan, Côte d’Ivoire, and the sold-out world premiere of their Triple Concerto for Piano Trio and Orchestra with the New York City-based Urban Playground Chamber Orchestra. They have been one of the honored recipients of a New York Foundation for the Arts Grant, and in the 2020 season, they were the recipients of the Chamber Music America Ensemble Forward and Classical Commissioning grants.

Individually, the members of Warp Trio hold degrees in performance from the Juilliard School, Cincinnati-College Conservatory of Music, and New York University. The beneficiaries of an incredibly diverse range of education, among the ensemble, they have received chamber music training from members of the Guarneri, Juilliard, Emerson, and La Salle Quartets as well as jazz instruction from figures such as Ray Anderson, Tony Moreno, Dave Pietro, and Mike Richmond.

Emily Joy Sullivan (b. 1987) is a composer, educator, and choral director based in Northern California.

Colin Minigan (b.1994) is a Massachusetts-born composer whose recent music is concerned with natural phenomena, and the relationship between static and fluid elements of musical composition and performance. In addition to composition Colin spent time studying ethnomusicology and uses this perspective to inform his compositions. Colin has frequently collaborated on dance projects with performances throughout the United States and is an administrator and curator of the Xsection Film Festival, a festival aimed at promoting interdisciplinary collaboration between dance, science, and film.