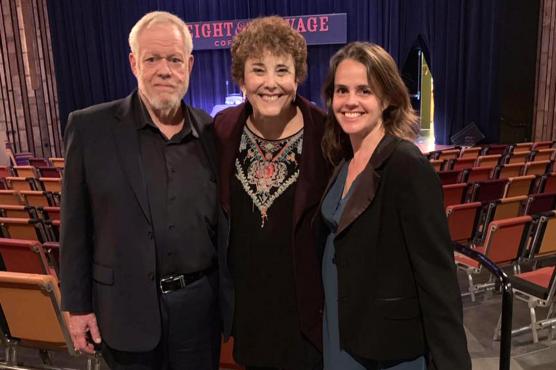 Trio Foss, a fusion of varying personalities, backgrounds, and nationalities, is a relatively new group on the Bay Area music scene. The chamber trio has already performed concerts throughout the region to critical acclaim.

Nina Flyer has toured, recorded and taught throughout Europe, Scandinavia and America. She has been Principal Cellist with the symphonies of Jerusalem, Bergen (Norway) and Iceland, the Women’s Philharmonic, and the Bear Valley Orchestra and has held the post of acting Principal Cellist with the San Diego Symphony. She records frequently for the TV and Motion Picture Industry and is presently Principal Cellist of the Pacific Chamber Symphony. Nina was the cello and chamber music professor and founding member of the acclaimed  in-residence piano trio, Trio 180, at the University of the Pacific, Conservatory of Music, for 20 years. Ms. Flyer has now started another trio, Trio Foss, and noted composer Robert Greenberg has written them a new piece. As a proponent of contemporary music, Ms. Flyer plays regularly with Composers Inc. and with other new music groups and has had many pieces written for her. Ms. Flyer is a featured soloist on two CDs; a concerto by Shulamit Ran, performed with the English Chamber Orchestra and solo and chamber works by Lou Harrison, both out on KOCH International. These two CDs have met with great critical acclaim and have both been nominated for Grammys.

Icelandic violinist Hrabba Atladottir studied in Berlin, Germany with professor Axel Gerhardt and professor Tomasz Tomaszewski. After finishing her studies, Hrabba worked as a freelancing violinist in Berlin for five years, regularly playing with the Berlin Philharmonic Orchestra, Deutsche Oper, and Deutsche Symphonieorchester. Hrabba also participated in a world tour with the Icelandic pop artist Björk, and a Germany tour with violinist Nigel Kennedy. Joshua Kosman, music critic of San Francisco Chronicle, praised her performance of Vivaldi’s “Spring”, and called her violin playing “delicate but fervent”. In 2004, Hrabba moved to New York, playing on a regular basis with the Metropolitan Opera, New York City Opera, Orchestra of St. Luke’s and New Jersey Symphony Orchestra among other orchestras. She also played with the Either/Or ensemble in NY in close collaboration with Helmut Lachenmann. Since August 2008, Hrabba is based in Berkeley, California, where she has been performing as a soloist and with various ensembles such as The Left Coast Chamber Ensemble, The Empyrean Ensemble, the ECO ensemble, the San Francisco Contemporary Music Players, and New Century Chamber Orchestra. Since 2009, Hrabba is a lecturer in Violin at UC Berkeley.

Miles Graber, piano, received his musical training at the Julliard School, where he studied with Anne Hull, Phyllis Kreuter, Hugh Aiken, and Louise Behrend. He has lived in the San Francisco Bay Area since 1971, where he has developed a wide reputation as an accompanist and collaborative pianist for instrumentalists and singers. He has performed with numerous solo artists, including Sarah Chang, Cho-Liang Lin, Camilla Wicks, Axel Strauss, Mimi Stillman, Judith LeClair, Martha Aarons, and Lev Polyakin. Mr. Graber performs frequently with violinists, Mariya Borozina and Christina Mok; flutists Gary Woodward, Amy Likar, and Ai Goldsmith; and clarinetist, Tom Rose. He is a member of the chamber groups, Trio Concertino, MusicAeterna, GGR Trio, and Sor Ensemble; as well as the new music group, Sounds New. Graber has been associated with such ensembles as the New Century Chamber Orchestra, Midsummer Mozart, the Oakland-East Bay Symphony, the Berkeley Symphony, the California Symphony, the Santa Rosa Symphony, Oakland Lyric Opera, Berkeley Opera, and Opera San Jose. He has accompanied master classes by such artists as Midori, Joseph Silverstein, Nadja Salerno-Sonnenberg, Pamela Frank, Alexander Barantchik, James Galway, Lynn Harrell, Yo-Yo Ma, Robert Lipsett, Ronald Leonard, and Leon Fleisher. He has been a frequent performance accompanist and chamber player with members of San Francisco Symphony, San Jose Symphony, Berkeley Symphony, California Symphony, Santa Rosa Symphony, San Francisco Symphony Youth Orchestra, Oakland-East Bay Orchestra Oakland-East Bay Youth Orchestra, UC Berkeley Symphony, and members of the San Francisco Conservatory faculty. He is on the faculty of the Crowden School in Berkeley and he accompanies students of the Young Musicians Program at UC Berkeley. He is a staff accompanist at the San Domenico Conservatory in San Anselmo, California, the San Francisco Conservatory of Music, and Northern California Flute Camp in Carmel Valley. He is pianist for the annual Young Artist Competition at the Mondavi Center for the Arts at UC Davis, as well as the annual Irving Klein Competition at UC San Francisco, and the Summer Brass Institute at the Menlo School in Atherton, California.