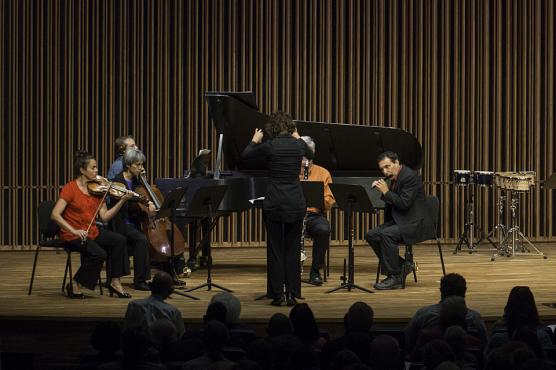 Composed by New Zealand-born American composer Annea Lockwood, Immersion (1998) for marimba and two tam-tams was written for Dominic Donato and Frank Cassara and arranged for the Talujon Percussion Quartet in 2001. It grew out of a fascination with the rich beating frequencies generated by long cluster rolls in the low register of the marimba and the interaction between the marimba and a quartz bowl gong tuned to F.

Frederic Rzewski: Coming Together (Part I)
with Christian Kiefer, voice

Composed for a flexible number of collaborative performers, Frederic Rzewski’s Coming Together was written in response to the 1971 uprising at the Attica Correctional Facility. Our performance of Coming Together will feature both undergraduate and graduate student instrumentalists, playing alongside the professional musicians of the Empyrean Ensemble. The performance will feature Christian Kiefer (Ph.D. American Literature, UC Davis, ‘06) reciting a text written by Sam Melville that reflects the conditions at Attica during his incarceration there. Kiefer is now director of the Master of Fine Arts in Creative Writing at Ashland University, and the author of five novels as well as works of poetry, short fiction, and drama. His latest novel, Phantoms (2019, Liveright/W.W. Norton), was included in the Kirkus Reviews shortlist of the best historical fiction of 2019.

The program ends with Steve Reich’s Pendulum Music (1968) in a performance staged by Alysa Banks (B.A., human development, with minors in music and sociology ’21), in the lobby of the Pitzer Center. Pendulum Music makes use of multiple microphones swinging, pendulum-style, over loudspeakers. Featuring dramatic squawks of feedback, the piece concludes when the inertia of the swinging microphones naturally come to rest. Sharp rhythms gradually wind down into a sustained drone piece. The composer writes, “If it’s done right, it’s kind of funny.”