Professor Iacovelli has designed more than 200 productions at theaters across the nation, including the critically acclaimed, TONY-nominated Broadway revival of Peter Pan starring Cathy Rigby. The Academy of Television Arts and Sciences awarded Iacovelli the coveted 2001 prime-time Emmy Award for his art direction of the A&E broadcast of Peter Pan. He also designed The Twilight of The Godson Broadway. Internationally he designed Pinter’s A Slight Ache for the Teatro Beckett in Barcelona and Oedipus in Colonus directed by Wole Soyinka for the Cultural Olympiad in Delphi, Greece. Recent designs include The Book of Daniel starring Aidan Quinn for NBC Primetime and Warner Theatricals’ Casablanca, a ballet based on the classic film.

In addition to his theater work, Iacovelli is a television and film production designer and art director for such shows as Ed, Babylon 5, The Cosby Show, Resurrection Blvd., and the films Honey, I Shrunk the Kidsand Ruby in Paradise. He works on the cutting edge of integrated digital art direction and was nominated for the 1997 Excellence in Production Design award from the Society of Motion Picture and Television Art Directors. He is both a TONY and an Emmy voter. He holds an MFA in Scenic Design and Art Direction from New York University.

Professor John Iacovelli shares his photographs of his set models for the South Coast Repertory Theatre’s production of “Sweeney Todd, The Demon Barber of Fleet Street.” The production runs in Costa Mesa Jan. 19 through Feb. 16.

In advance of the upcoming Art Director Guild’s annual awards, John Iacovelli assessed the production design for the acclaimed film Bridge of Spies for Variety.

Judged by the lofty standards of dramatic literature, Paul Oakley Stovall’s “Immediate Family” isn’t all that impressive. But as dramatic entertainment, it’s often touching and amusing and through its sensitive handling of topical subjects it means to do some good in the world.

Professor John Iacovelli has been nominated by LA Weekly (35th Annual Theater Awards) for Best Set Design for the Los Angeles Matrix Theatre production of  “We Are Proud to Present a Presentation About the Herero of Namibia, Formerly Known as Southwest Africa, From the German Sudwestafrika, Between the Years 1884-1915.”

This is the fourth such nomination for Professor Iacovelli, who won the 22nd NAACP Theatre Award for Set Design for Blues for An Alabama Sky, by Pearl Cledge, starring Robin Givens.

Professor John Iacovelli has  been nominated for a 2012 Jeff Award for his scenic design for “Immediate Family” directed by Phylicia Rashad at the Goodman Theatre in Chicago.

This is the highest award celebrating excellence in Chicago Theatre. 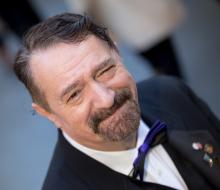