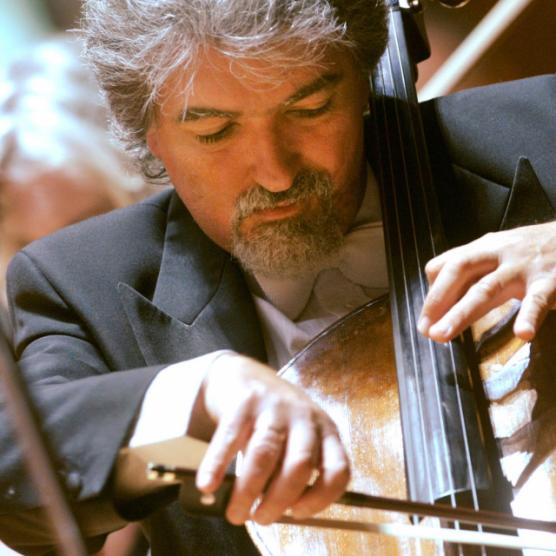 Lyric for Strings (written 1946) is dedicated to George Walker’s grandmother, with whom he was very close. Walker’s grandmother escaped slavery and separated from her first husband when he was sold. She died shortly before Lyric’s completion. Listeners might find the short work reminds them of Samuel Barber’s Adagio for Strings (written 1936), which had an impact on Walker—after all, they shared a composition teacher at Curtis. Walker, it should be noted, was a decorated American composer, who achieved many firsts, including being the first Black American composer to win the Pulitzer Prize in Music.

Both the composer Alejandro Civilotti and the cello soloist Eduardo Vassallo are from Argentina, as is the UC Davis Symphony Orchestra’s own director. Civilotti wrote Auris Concertum in 2001, which premiered at the Teatro Colon in Buenos Aires in 2009 with cello soloist Eduardo Vassallo. Vassallo is visiting the UC Davis Symphony Orchestra from England, where he is principal cellist of the City of Birmingham Symphony Orchestra. Civilotti is part of a second generation of contemporary Argentinian composers and now lives and teaches in Barcelona, Spain. The concerto is dedicated to Queen Sofía of Spain, who was one of Civilotti’s benefactors and intervened on behalf of the composer in order to get him a Cochlear implant, which allowed him to regain hearing he’d lost in his childhood years.

The concerto is in fact part of a set of two, one for violin (Auris Resonantiam) and one for cello (Auris Concertum). The name “Auris” refers to the journal “Auris” on cochlear implants of the García Ibáñez Foundation, which gave the composer his implants. The work opens with a solo cello cadenza, which reappears at different points of the piece as a memory, and is built on a motivic element built on resonances of a root pitch: B flat. What follows are harmonic frequencies in the composer’s “tinnitus,” from which he has suffered for many years. In the second movement, the composer sets the soloist on an incredibly virtuosic path against an orchestral backdrop that is very dense. It was written to symbolize how difficult it might be for someone with hearing difficulties to understand individual voices in a crowded space.

Petrushka chronologically fits between Firebird and Rite of Spring—all ballets produced by Diaghilev’s Ballets Russes 1910–1913—and yet the version presented on this concert was revised by Stravinsky in 1947, a few years after he had become a Californian and two years since becoming a naturalized U.S. citizen. For those curious about Stravinsky’s Russian roots, he was born near St. Petersburg, Russia, and of noble Polish heritage with his father born in present-day Belarus and his mother born in Kyiv. The 1947 orchestration is better suited to the concert setting (instead of the orchestra pit). Stravinsky’s use of piano is a noticeable difference instead of the earlier double harps.

This event has been archived and may contain content that is out of date.
Event
November 19, 2022 - 7:00 pm - 9:00 pm Christian Baldini
Mondavi Center for the Performing Arts, Davis, CA
View map
Faculty Profile