Lecture-Recital: “Persian Serenades of the West” 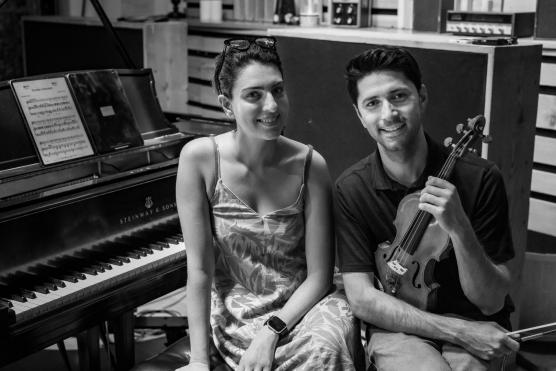 Maryam Farshadfar, piano (Ph.D., ethnomusicology, University of Montreal) and Shawyon Malek-Salehi, violin (B.A., music, UC Davis, ‘14) present this lecture-recital, which discusses the history of piano and violin in Iran, and the influence of Persian culture on Western composers from the late 19th century to the present. The recital includes performances of a variety of lesser-known pieces by Western and Persian composers, including pieces by Samin Baghcheban, Gena Branscombe, Henry Cowell, and others.

Maryam Farshadfar has had a passion for playing the piano since the age of six, which has taken her across the world to play and to share her love of music. She holds a master’s degree in piano performance and has performed in solo recitals and with chamber ensembles at prestigious concert halls including the Tehran Niavaran Hall and Konzerthaus Freiburg. Maryam has a Ph.D. in ethnomusicology from the University of Montreal (2017) where she was the recipient of the Bourses d’études supérieures for her dissertation, “The Practice of Persian Piano in Iran from 1879 to 1979,” which breaks ground in the vibrant world music cultural debate about the traditional practice of Persian piano music. She enjoys an active career as a piano performer, scholar, and lecturer. She is currently a full-time music faculty in San Jose Evergreen Valley College and the music director of Evergreen Valley College Choir.

Shawyon Malek-Salehi graduated from UC Davis in 2014 with a bachelor’s degree in music (violin performance) and pharmaceutical chemistry. He began studying the violin at the age of five and is now a violinist with the Sacramento Philharmonic and Opera, Oakland Symphony, and Stockton Symphony. He also substitutes with orchestras throughout Northern California such as the Berkeley Symphony, Monterey Symphony, and others. He has performed at the Royal Albert Hall (BBC Proms), Amsterdam Concertgebouw, and other European venues. He has also performed at the Aldeburgh Music Festival with the Britten-Pears Orchestra and studied at the Castleman Quartet Program. While at UC Davis, he served as concertmaster of the UC Davis Symphony Orchestra from 2010 to 2013 and won the UCDSO Concerto Competition in 2009, 2012, and 2013. At UC Davis, Shawyon studied with Dan Flanagan and participated in masterclasses with Fritz Gearhart, Ida Kavafian, Rachel Barton Pine, David Halen, and Gil Shaham. He enjoys his life as an active performer, and also loves skiing, hiking, and traveling.

Shawyon Malek-Salehi  graduated from UC Davis in 2014 with a double major in music (violin performance) and pharmaceutical chemistry. He began studying the violin at the age of five and was concertmaster of the UC Davis Symphony Orchestra (UCDSO) from 2010 to 2013 and during their international tour to Spain in 2012. He won the UCDSO Concerto Competition in 2009, 2012, and 2013. At UC Davis, Malek studied with Dan Flanagan and also participated in masterclasses with Fritz Gearhart, Ida Kavafian, Rachel Barton Pine, David Halen, and Gil Shaham.