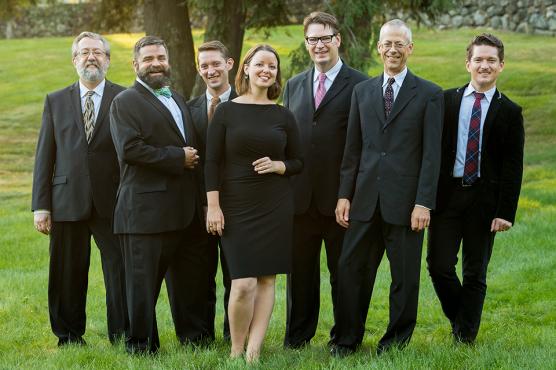 Cipriano de Rore: I madrigali a cinque voci
with Italian recitations by Viola Ardeni, lecturer in the Department of French and Italian at UC Davis

Blue Heron brings to Davis mid-sixteenth-century Italian madrigals for five voices by the Flemish composer Cipriano de Rore, setting lyric poems by Petrarch and others. The poems will be recited in Italian to make audible the ways in which the music captures a wide range of emotions about the pain and pleasures of love. Blue Heron’s world premiere recording (in 2019) of De Rore’s 1542 madrigal set was made possible in part by the research of Jessie Ann Owens, UC Davis Distinguished Professor of Music Emeritus and former dean of Humanities, Arts and Cultural Studies. The collaborative project was awarded the American Musicological Society’s Noah Greenberg Award.

De Rore arrived in Italy in the 1530s, working at first as a freelance musician. His very first publication was the 1542 Madrigali a cinque voci, the book from which the madrigals to be presented are taken. This landmark publication launched his successful career as chapelmaster in Ferrara, Venice and Parma, where he died in 1565 at only 49.

He was the first composer to organize a madrigal book in modal order, moving from minor to major keys. The poetry itself is also highly organized, consisting of a cycle of sixteen sonnets. The ordering enables the music to express both the large-scale narrative of the poetry as well as its many affective moments. One of the important conclusions Owens has drawn about De Rore’s work is that his innovations were genre-defining for the madrigal as a whole: “These madrigals, each one a world unto itself, when taken together, tell a story about the pain of love. With this print De Rore established the madrigal as a genre that celebrates the fusion of music and poetry.”

Blue Heron has been acclaimed by The Boston Globe as “one of the Boston music community’s indispensables” and hailed by Alex Ross in The New Yorker for its “expressive intensity.” The ensemble ranges over a wide repertoire from plainchant to new music, with particular specialities in 15th-century Franco-Flemish polyphony and early 16th-century English sacred music and is committed to vivid live performance informed by the study of original source materials and historical performance practices. Blue Heron’s catalogue of a dozen recording include five discs of music from the Peterhouse Partbooks, copied 1540 for Canterbury Cathedral, much of which consisted of world premiere recordings; the fifth disc won the prestigious 2018 Gramophone Classical Music Award for Early Music, the first ever awarded to a non-European ensemble in the four-decade history of the Gramophone Awards.

Founded in 1999, Blue Heron presents a concert series in Cambridge, Massachusetts, and has appeared at the Boston Early Music Festival; in New York City at Music Before 1800, The Cloisters (Metropolitan Museum of Art), and the 92nd Street Y; at the Library of Congress, the National Gallery of Art, and Dumbarton Oaks in Washington, D.C.; at the Berkeley Early Music Festival; at Yale University; in Chicago, Cleveland, Kansas City, Milwaukee, Montreal, Pittsburgh, Philadelphia, Providence, St. Louis, San Luis Obispo, Seattle, and Vancouver; and in Cambridge and London, England. Upcoming engagements include a visit to the University of California, Davis, and a debut at the Tage alter Musik Regensburg. Blue Heron has been in residence at the Center for Early Music Studies at Boston University and at Boston College, and has enjoyed collaborations with A Far Cry, Dark Horse Consort, Les Délices, Parthenia, Piffaro, and Ensemble Plus Ultra.