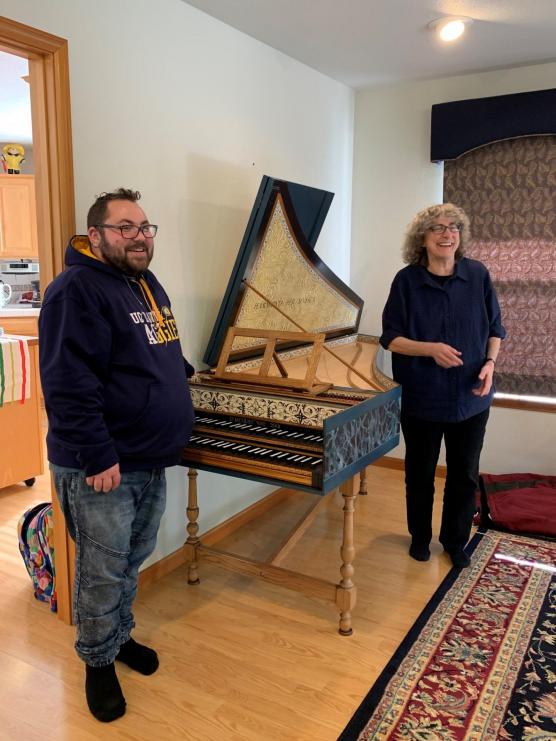 Since last year, one of Storz’s major accomplishments was assisting Phebe Craig, lecturer in music, in cataloguing the music department’s extensive collection of early music instruments. The project was a major undertaking in efforts of documentation and helping to oversee restoration of the instruments.

“The process of cataloguing and restoring the collection was exciting and very educational albeit time consuming,” said Storz. “It required pulling out all the instruments, grouping them with their proper families or consorts, assessing the condition, deciding what repairs they may need, whether or not they were playable, and determining their set pitch.”

“A brief summary of instruments we have in the collection include harpsichords, a virginal, a clavichord, chamber organs, a consort of viola da gambas, a group of Renaissance and Baroque recorders, sacbuts, crumhorns, Renaissance and Baroque flutes, lutes, the shawm, the vielle, cornettos, percussion instruments, and a few more. Due to how diverse the collection is, finding repair shops that knew how to execute the repairs required contacting many different people who all offered more information about the instruments including the care they required. The final stage was finding a way for the instruments to play together in a class setting.”

Regarding Storz’s award, academic achievements and cataloging the collection, Craig praised her student.

“In addition to learning viol this year, he has been transcribing Byrd’s Masses for the viol consort and continuing to discover seventeenth-century harpsichord music,” said Craig. “Last August we dared to open the closets in the back of Room 115 where the collection of early instruments is stored. William and I inspected, dusted, categorized, photographed, determined pitch, general quality and the need for cleaning these instruments. Then planning the weekly schedule of multiple ensembles began in earnest. With unflagging generosity, enthusiasm, and abundant good nature, William and our other indispensable assistant, Melita Denny, got this group off the ground. There is much more to say but I’m going to stop here.”

Storz’s interest in early music began at a young age.

“I first encountered early music when I was a young child and my parents gave me CD’s of Bach and Vivaldi,” said Storz. “I naturally gravitated to that sound world more than Beethoven or Brahms, though I do love them as well. In junior college I was primarily a bassoonist and learned many of the Vivaldi Concerti. While there I encountered the harpsichord for the first time, when one was gifted to me though a connection I had through the local symphony and my piano teacher. The instrument is a small kit harpsichord that needed love and work, so I took it back to my apartment and began to make repairs with research from the internet.”

“When looking for a school to transfer to I went to a Baroque ensemble concert at UC Davis with a friend who was attending the university, and that concert confirmed for me that I should go to UC Davis, but also the Baroque and early music was what I needed to pursue and make my focus.”

A native of Willows, CA, Storz played bassoon in high school concert band and sang in choir. He studied music at Shasta College where he played bassoon, double bass, and piano while participating in three choirs, two orchestras, and concert band. In addition, he led student chamber groups and studied music history and theory privately with Dr. Richard Allen Fiske. At UC Davis Music, his major was track centered on theory, history, and ethnomusicology and he also completed a minor in European history. His future plans include teaching privately while practicing and refining his writing. His goal for the upcoming year is to apply to graduate programs and interview or audition for said programs.

The David S. Saxon Award for Excellence in the Performance of Early Music was established through generous gifts in 1979 and 1982 by then President and Mrs. David S. Saxon. The award is presented annually to a registered student (or students) who have demonstrated exceptional accomplishment in the performance of early music. Nominations are received by the faculty of music, who confer the award or awards at the annual recognition ceremonies of the Department of Music. Since the establishment of the Saxon Award in 1985, the performance of early music has broadened in its historical sweep and refined its methods of inquiry. Early music is now defined as anything between Gregorian chant and Berlioz.