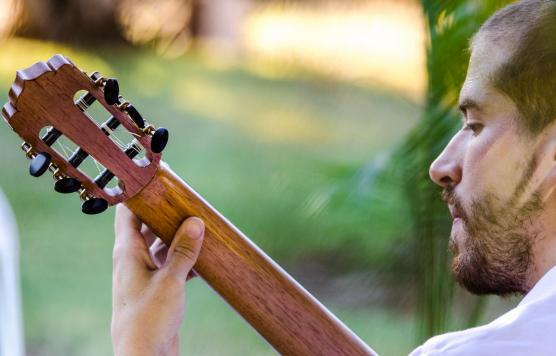 This work is dedicated to all of the victims who have suffered at the hands of Nicaraguan dictator Daniel Ortega and his wife and Vice President Rosario Murillo, including the over 300 Nicaraguans who were murdered by Ortega and Murillo following the 2018 protests, and the dozens of political prisoners who have been imprisoned for standing up to his regime.

Among them is 24-year-old student leader Lesther Alemán, who famously stood up to Ortega in 2018, and told him  “nosotros hemos puesto los muertos”: we, the Nicaraguan people, have paid in blood for Ortega’s political ambitions. Alemán was recently sentenced to 13 years in prison by Ortega’s corrupt judicial system.

This piece is a meditation on repression and protest, and a personal cry of anger and frustration. It begins very quietly, almost inaudibly, and gradually builds to a violent, brutal climax that never resolves. Buried within this process are two motives: a message to Ortega whispered through the bass flute, begging him “no más,” and distorted fragments of the famous Nicaraguan revolutionary song “Nicaragua, Nicaragüita” that represent my country’s bruised spirit under Ortega’s oppressive rule.

The award, an annual prize for composition, was first awarded in 1986 by Composers, Inc., a non-profit advocate organization for living American composers.

The award began in 1986 as a composition prize for living American composers. In 1991 it was renamed in honor of Lee Ettelson (1898-1988). He was a successful reporter and editor for newspapers across the country, working for several years as the right-hand-man of media titan William Hearst. After retiring from journalism at The San Francisco Examiner, he also served as the head of the California Department of Motor Vehicles under Edmund G. (Pat) Brown. Lee’s wife, Suzanne Ettelson (1913-2005), was a driving force in the San Francisco music community. She founded the San Francisco Chamber Music Society in the 1960s, before helping found Composers, Inc, where she served on the board for several years, including as the board president. After her passing, her name was added to the award.

Gabriel José Bolaños (b. 1984 Bogotá, Colombia) is a Nicaraguan-American composer of solo, chamber, orchestral and electronic music. He holds a PhD in composition from UC Davis and a BA from Columbia University. He is currently an Assistant Professor at the  Herberger Institute for Design and the Arts, School of Music, Dance and Theater at Arizona State.