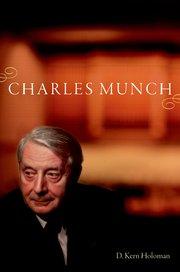 The Association for Recorded Sound Collections has given D. Kern Holoman an award in excellence in “Historical Recorded Sound Research in Classical Music” for his book Charles Munch (Oxford University Press, 2012). The book features an online appendix, Charles Munch—The Recorded Legacy, which examines the expansive discography that the conductor was responsible for.

The award will be formally presented at the association’s annual conference in May 2014, in Chapel Hill, North Carolina.

Begun in 1991, the ARSC Awards are given to authors of books, articles or recording liner notes to recognize those publishing the very best work today in recorded sound research. In giving these awards, ARSC recognizes the contributions of these individuals and aims to encourage others to emulate their high standards and to promote readership of their work. Two awards are presented annually in each category, for best history (H) and best discography (D), and several others are acknowledged with Certificates of Merit.

Awards are presented to both the authors and publishers of winning publications. Winners are chosen by a committee consisting of three elected judges representing specific fields of study, two elected members-at-large, the editor of the ARSC Journal and the President of ARSC.