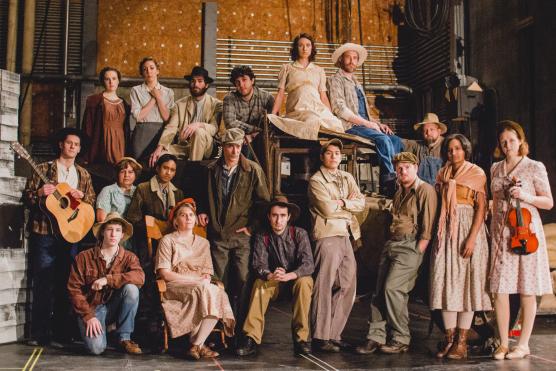 UC Davis Granada Artist-in-Residence Miles Anderson directs Frank Galati’s adaptation of John Steinbeck’s  “The Grapes of Wrath,” the story of tenant farmers fleeing the Dust Bowl during the Great Depression in pursuit of jobs, dignity and a future. Presented by the UC Davis Department of Theatre and Dance, this staging with both original and traditional American music, honors this 75th anniversary year since the publication of Steinbeck’s epic novel.

“The Grapes of Wrath” opens on March 6 and plays through March 16 in Main Theatre, Wright Hall. There will be audience talkbacks with the director, cast and creative team members directly after the performance on Friday, March 7. An interdisciplinary Grapes of Wrath Symposium is open to the public and free-of-charge on March 7 in Lab A, Wright Hall.

Director and Granada Artist Miles Anderson feels a deep connection to the poverty-stricken Joad family and their migrant trek in search of opportunity in “The Grapes of Wrath.” His grandparents  had immigrated in an ox wagon to the “promised land” of Southern Rhodesia (now Zimbabwe) through the Transvaal region.

“My mother ‘s upbringing was every bit as deprived and penniless as the Joads’,” says Anderson. “‘The Grapes of Wrath’ was a natural fit for me. Besides, not only is Davis smack bang in a farming community but barely 150 miles south of here is Salinas where Steinbeck lived and worked. Of course, the contemporary resonances of the play are shockingly relevant. It was also a chance to indulge my passion for American folk and country music.”

Music is not only the core element in Anderson’s staging of the Joads’ exodus out of the Dust Bowl, but also a fierce conduit to Steinbeck. While writing “The Grapes of Wrath,” the famous author acknowledged using “the forms and mathematics of music rather than prose.” Particularly when composing the poetic chapters, Steinbeck reportedly listened to symphonic music as inspiration for the movement and tone of his words.

With the help of music director and doctoral student Alex Stalarow, Anderson employs folk idiomatic music and spiritual hymns to support the characters, themes and emotions of Steinbeck’s drama. Additionally, the use of 1930’s popular music helps to transport audiences into the Great Depression era.

Stalarow leads four musicians who play guitar, banjo, fiddle, mouth organ, jaw harp and mandolin. Their music winds through the entire production including new blue-grass-inspired compositions and arrangements, and traditional songs and spirituals sung by the ensemble such as “Wayfaring Stranger” and “O Sinner Man.”

“Folk and bluegrass musicians like Doc Watson and Woody Guthrie were influential to the songs we composed,” explains Stalarow. “For the popular folk songs and hymns, we chose selections that the characters, themselves, might have sung to help them get through their troubles.”

“Sometimes, the music comes directly from the actors as part of the show. At other times, it serves as incidental music for a scene or transition. The music often comments on the dramatic action by further enhancing the moment, and at times, it provides contrast to the action on stage, creating a wonderful counterpoint between what is heard and what is seen.”

Another doctoral candidate, John Zibell, plays the lead role of Tom Joad. An established actor who has worked on-screen, Off-Broadway and with director Mike Nichols, Zibell says that Miles gives an actor the space to create things that can live.

“Miles has directed many of the scenes I’m in by telling stories; sometimes he tells very detailed, very nuanced stories about putting on a cap in sadness for instance, or the sound of the wind and what that might mean to a man about to leave his family.”

“Miles has yet to say to me, do it like this. Instead he calls out from the house—something like, ‘John, do you think that when Tom comes down to talk to Casy, that it’s finally the coming together of these two philosophers, hungry for something, just leaning against a tree and seeing the migrant camp as a prison that everyone is locked in?’ It’s a great way to work.”

Scenery and lighting by internationally renowned designer Thomas J. Munn deliver the look and feel of Steinbeck’s migrant worker landscape.  Munn was able to secure a 1927 truck from the San Francisco Opera which is the scenic cornerstone. It had been used with Munn’s lighting design in the 1976 production of “Pagliacci.”

Costume designer Roxanne Femling brings more Depression-Era authenticity. Her costumes include dresses made from original 1930’s flower sack designs following the motto of the day, “Repair, reuse, make do, and don’t throw anything away.”

Anderson weaves the many onstage elements together in a deeply heartfelt expression of Steinbeck’s work.

“This play is a dramatic rendition of a novel that has been banned and burned more than most, whose censorship was a key event in the creation of the Library Bill of Rights. I want to share this emotional and inspirational enormity with the audience—Steinbeck’s  expression of the indomitability and goodness of the human spirit.”

There will be an audience talk-back with director, cast, crew, and designers immediately following the performance on Friday, March 7.

The Department of Theatre and Dance will be hosting an all-day interdisciplinary Grapes of Wrath Symposium on Friday, March 7, to explore the work directly as well as the larger social, cultural and historical issues it raises. Participating UC Davis scholars include Sasha Abramsky, part-time lecturer and author of “The American Way of Poverty: How the Other Half Still Lives,” and Ann Stevens, director of the Center for Poverty Research and chair of the Department of Economics. The symposium is open to the public and free-of-charge.

Bio
Miles Anderson has been acting on stage and screen for many years. Trained at the Royal Academy of Dramatic Art, he recently completed his third season at the Old Globe Shakespeare Festival in San Diego. He has twice been awarded the San Diego Theatre Critics Circle Craig Noel Award for Outstanding Lead Performance in a Play and has received three UK Theatre Awards.

Many Roads to
The Grapes of Wrath
Photo blog with narratives