In the role of Choreographer/Movement Director she has collaborated with various companies around the bay and beyond.

As a teaching artist she has taught throughout the Bay Area for the American Conservatory Theatre, the Berkeley Rep School of Theatre, Foothill College, and has both instructed and directed for Cañada College.

Michele is a Resident Artist with the acclaimed San Francisco based company, Crowded Fire Theater, and serves on their Literary Committee. She also serves on the Steering Committee for the Latinx Theater Commons, a national movement and flagship program of Howlround.

She holds a BA in Drama from UC San Diego and earned her MFA from the former Professional Actor Training Program at UC Davis.

Alumna and lecturer in Theatre and Dance Michele Apriña Leavy (MFA dramatic art, ’94) has returned to in-person learning at UC Davis, which includes her course for the Global Study Program in Continuing and Professional Education | International. Leavy’s positive perspective is spotlighted in an article about the return to in-person instruction on the program’s website.

We’re back in person! Take a deep dive into acting. This class is an exploration, building on the fundamentals of acting technique and tools drawn predominantly from Stanislavsky. It is Gateway into the Advanced Acting courses at UC Davis. Let’s work on your creative toolkit – your voice, body, and imagination! We’ll also be looking at today’s hottest playwrights, and check-in with what’s currently happening in the theater industry. Come out and play with us!

Questions? Hit me up via email: mcleavy@ucdavis.edu

Alumna and Lecturer Is Cover Story for Bay Area Publication

Alumna Michele Apriña Leavy (MFA dramatic art, ’94), a lecturer in theatre and dance, is featured on the cover of the April issue of Montclair Living, a monthly publication serving Oakland. The article covers Leavy’s career as a performer and arts educator who rose to the challenge of teaching acting in a virtual classroom. In addition, Leavy discusses her heritage and background as well as her affection for her community.

Michele Apriña Leavy (MFA dramatic art, ’94), a lecturer in theatre and dance, has been accepted into the ACCELERATE Fellows Program, designed to support the creation of inclusive and equitable e-learning environments, including but not limited to the transition of face-to-face courses into online courses.

Michele Apriña Leavy (MFA dramatic art, ’94), a lecturer in theatre and dance, has been honored by UC Davis Continuing and Professional Education with an Outstanding Service Award for the academic year 2019-2020 in recognition of her partnership, service and commitment to continuing education.

During spring quarter 2020, Leavy had to adapt her course, DRA198-Presentation, Communications, and Collaboration Skills for International Students which is offered with the UC Davis Global Studies Program, for online learning due to the pandemic. 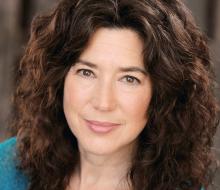