Auditions for “Peter and the Starcatcher” 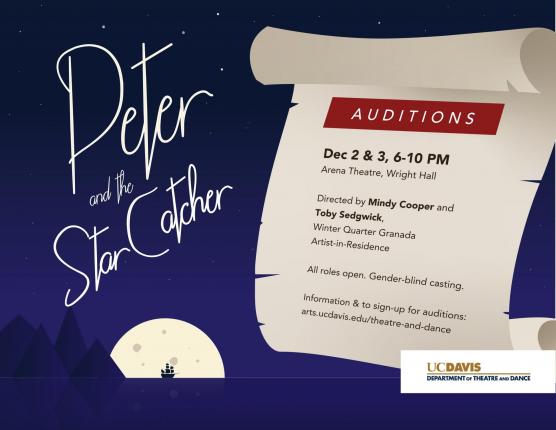 All appointment slots are full. If interested in auditioning, come to the auditions on either Dec. 2 or 3 and we will try to accommodate you as soon as we are able.

The Department of Theatre and Dance will be holding auditions for “Peter and the Starcatcher” on Dec. 2 and 3 in the Arena Theatre, Wright Hall. The adventure comedy will be performed in winter quarter Feb. 27-29 and Mar. 5-7.

Auditions are open to all UC Davis students.

Call-backs will be held Dec. 4 beginning at  6 p.m. Rehearsals will begin at the beginning of winter quarter.

The production will be co-directed by Mindy Cooper, professor of theatre, and Granada Artist-in-Residence Toby Sedgwick, an awarding-winning director of stage movement in London and on Broadway.

“Peter and the Starcatcher” is a tour-de-force play with music, for an ensemble of wickedly passionate and dedicated actors. A gloriously fictional Prequel to the Peter Pan story, it is a whirlwind of a theater piece, imaginatively told in classic Story Theater technique- 12 actors playing dozens of roles- Sailors, Seamen, Pirates, Mollusk Island Natives, Orphans, Narrators, Puppeteers, as well as characters below. All are intertwined and interwoven, interestingly intersecting pathos and history and humor, lots of humor.

Please pick a few characters that resonate with you and work on their characterization, physicalization, accent, and inner life. All characters sing, some more than others, as noted.

Casting is completely gender blind. Please commit with adventure and abandon to these characters.

Understudies will also be cast from these auditions.

If you sign up for a slot, you must show up. It is both neglectful and unprofessional to sign up for an audition and not attend. We are sure you understand that a no-show has to be taken as an irresponsible act. The Department of Theatre and Dance encourages all students to act responsibly. If you are unable to show up for your slot, you must reach out to company manager Stephanie Nielsen to alert her. sknielsen@ucdavis.edu

Boy/Peter: A boy who doesn’t miss much. Nameless, homeless, and friendless at the beginning of the play and a hero by the end. A survivor. More than anything in the world, he wants a home and a family. British/Cockney.

Prentiss: Ambitious, hyper-articulate, logical lost orphan; yearns to be a leader, even as he knows in his heart that he never shall be one. A bit of a blowhard with just the teeny-tiniest touch of cowardice. Cockney

Ted: Orphan, dreamer. Obsessed with food: the eating of, the fighting over, the dreaming about. A natural actor, an easy wit, perhaps a future poet. Cockney

Lord Leonard Aster: The very model of a Victorian English gentleman, loyal subject to the Queen, devoted father, faithful friend. Lord Aster is a Starcatcher – dedicated to protecting the Earth and all who dwell thereon from the awesome power of starstuff. British/RP  accent. And a large command of the ancient language Dodo.

Molly Aster: a true leader at a time when girls are mostly followers. Will risk everything for the sake of Doing Right. Curious, intelligent, beginning to feel things she doesn’t understand – romantic longings that revert to childish tantrums under pressure – because, after all, she’s a thirteen-year-old kid. She’ll be a great woman one day. British accent. She also dabbles in ancient language Dodo. And pretty darn fluid in Norse Code- the Viking Signaling System.

Mrs. Bumbrake: Molly’s nanny. British to the bone. Still has enough of her girlish charm to turn a sailor’s head and leaven his dreams. Stiff in the lip, loose in the hip, fun on a ship. And a big fan of alliteration. Cockney accent but knows when to turn on the British/RP accent. Solo singing.

Grempkin: The mean and malodorous schoolmaster of St. Norbert’s Orphanage for Lost Boys. Cockney/British accent. Plus comedic use of Italian and Spanish.

Bill Slank: The Neverland ship’s vicious captain. Without the skill or quality to lead anyone but himself, and always into disaster. A greedy bastard who’d sell his own mother for a ship to command and send boys to their doom for the favor of those who would use starstuff for personal gain, global domination, or worse. An orphan, too. Full throttle Pirate dialect.

Alf: An old seafaring sea dog. Something about him appeals to the feminine sensibility – might be his bowlegs, his saucy gait, his gaseousness, or his kind heart. Cockney Accent. Solo singing.

Mack: A very bad sailor who wants to be anywhere but under the thumb of Bill Slank. Pirate Dialect.

BlackStache: Long after everyone else got out of the pirate business, he continues to terrorize the seven seas in search of a hero worthy of his villainy. Famous for his face foliage, he started shaving at age ten, had a bushy handlebar by eleven, and the blood of twenty crew members on his hands by twelve. Heartless and hirsute, suspiciously well read, partial to the poetical and theatrical, and given to a ferocity from which no good shall ever spring. Solo singing. The ultimate well-rounded dialectician.

Sánchez: A hardworking Spanish pirate with an identity crisis. Mysteriously inane Spanish accent a plus.

Fighting Prawn: King of the Mollusks on Mollusk Island. Kidnapped by British sailors and brought in chains to England, he served as sous-chef in a country estate in Derbyshire, where, for no good reason, he learned Italian wines and mastered Italian cuisine. Since returning to his island kingdom, he vengefully murders any English with the temerity to land on his Mollusk Isle domain. Comedic use of Italian and French, as well as full-on Mollusk dialect.

Hawking Clam: Son of Fighting Prawn and Sweet’n’Sour Shrimp. One day, he will ascend the Clam throne as head of the Royal Clam Clan. Speaks Mollusk.