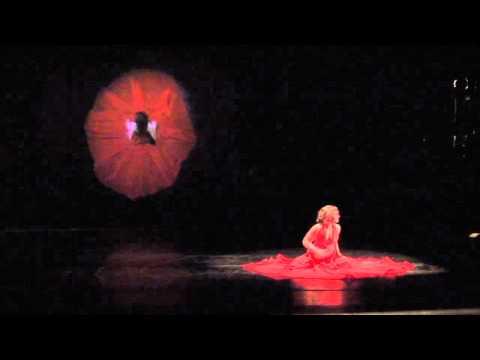 in Collaboration with Kegan Marling and the Dancers

The Department of Theatre and Dance is proud to present a two-part production: the world premiere of and the snow fell softly on all the living and the dead… by Granada Artist-in-Residence Ellen Bromberg followed by a celebration of the work of Professor Della Davidson through choreography and performances by her long-time collaborators.

The title of and the snow fell softly on all the living and the dead… derives from the famous James Joyce poem, “The Dead.”  Visual elements, including live video of various perspectives onstage, play a large role in a meditative environment of changing light, forms and sound.

Performers exist in vignettes as images that rise and fall in time and space, engaging ideas of life, beauty and loss. The piece was conceived as a staged installation by Della Davidson and Ellen Bromberg with choreography and media design by Ellen Bromberg in collaboration with Kegan Marling and the dancers.

The second half of the evening celebrates the work of Della Davidson, Department of Theatre and Dance professor 2001–12, who passed away in March from breast cancer. It includes choreography, performances and a film by her long-time collaborators from Sideshow Physical Theatre and members of the Bay Area dance community.

Ellen Bromberg, a 2006 Guggenheim Fellow, has been creating dances for companies and solo artists for over 30 years. She has received numerous accolades including three Isadora Duncan Dance Awards, a Bonnie Bird American Choreographer Award, a Pew National Dance/Media Fellowship and grants from the National Endowment for the Arts. She is currently Associate Professor in the University of Utah’s Department of Modern Dance.

From The Dead by James Joyce:

“A few light taps upon the pane made him turn to the window. It had begun to snow again. He watched sleepily the flakes, silver and dark, falling obliquely against the lamplight. The time had come for him to set out on his journey westward. Yes, the newspapers were right: snow was general all over Ireland. It was falling on every part of the dark central plain, on the treeless hills, falling softly upon the Bog of Allen and, farther westward, softly falling into the dark mutinous Shannon waves. It was falling, too, upon every part of the lonely churchyard on the hill where Michael Furey lay buried. It lay thickly drifted on the crooked crosses and headstones, on the spears of the little gate, on the barren thorns. His soul swooned slowly as he heard the snow falling faintly through the universe and faintly falling, like the descent of their last end, upon all the living and the dead.”

Della Davidson was a vital creative force for the Department of Theatre and Dance for over ten years and was a central figure in the Bay Area dance world since the early 1980s.

Ellen Bromberg, a 2006 Guggenheim Fellow, has been creating dances for companies and solo artists for over 30 years.She has received numerous awards for her work including three Isadora Duncan Dance Awards; one for outstanding achievement in choreography for “The Black Dress,” which was subsequently broadcast on PBS Television’s “Alive From Off Center,” a second for her work with Douglas Rosenberg on Singing Myself A Lullaby and a third for Visual Design for her work with Della Davidson for Collapse (suddenly falling down).She was also honored with a UC Berkeley Townsend H