January 25, 2013 History of Rhetoric and PerformancePh.D. Adviser, Theatre and Dance

She has scripted, devised, produced and toured, several theory performance installations in Europe and North America and explores alternative ways of disseminating modes of knowing within aesthetics and scholarship.

Research has focused on transdisciplinary study of Shakespeare’s language in Negotiating Shakespeare’s Language and a new scholarly edition of Romeo and Juliet downloadable from www.romeoandjulietedition.com (both co-written with Peter Lichtenfels). The experimental essay text Disunified Aesthetics (2014) argues for a broadening of aesthetic power in an increasingly diverse set of western democracies. A major study of performativity was published in 2019, Politics of Practice. The early modern study, Conversational Rhetoric, or What Gets Left out of the (neo)Liberal State, is published in 2021. 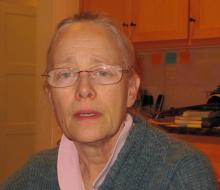