Rose Kelly combines a variety of textile techniques with printing, painting, and drawing into what she calls “three-dimensional collage.” Travel is one of her major sources of inspiration, and references to countries she has explored, such as Bhutan, Burma and Laos, can be seen in her art. After college, a series of residencies, including a two-month residency at Altos de Chavon, in the Dominican Republic, an affiliate of Parson School of Design, and two multiyear California Art Council grants, allowed her the time to continue experimenting and making art.

She has taught art and design classes to a variety of ages and abilities at museums and schools, including UC Davis, the Bay Area Discovery Museum, Redwood College, the Mendocino Art Center and Creative Growth. Her design career includes work as a freelance graphic artist, art-to-wear and accessory designer, curator, costume and prop designer, evaluator and exhibit developer. As a member of the Board of the Textile Arts Council, a curatorial support group at the de Young Museum, she held the position as Board Chair from 2012 to 2014 and Chair of the Programming Committee from 2014 to 2015.

Rose’s artwork has been exhibited in solo and group exhibits here and abroad. It is included in the collection of the de Young Museum, San Francisco; the Alameda County Collection of Multicultural Visual Art, Oakland, CA; Altos de Chavon, Dominican Republic; and private collections here and abroad. Her artwork is featured in several books, including Art Wear: Fashion and Anti-Fashion by Melissa Leventon and Beautiful Necessity – The Art & Meaning of Women’s Altars by Kay Turner. Her art can be viewed at www.estradafineart.com/art-gallery/rose-kelly.

Articles and reviews by Rose have appeared in publications and blogs, including Farewell to Ames appearing in the Winter 2016 issues of the British magazine, Raw Vision.

Her public art commissions include collaboratively creating a twenty-first century Peace Table in Balatonalmadi, Hungary. She has served on public art panels and has created an inventory of privately funded art for the City of Oakland and an inventory and assessment of the public art throughout the Bay Area Rapid Transit stations.

Students and faculty participate in The 25 Million Stitches Project

Over 40 students and Department of Design lecturers Rose Kelly and Christine Knobel from DES70: Introduction to Textile Structures are participating in The 25 Million Stitches Project, a response to the global refugee crisis. 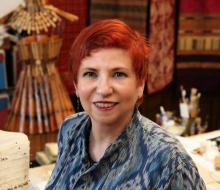