Kirsten Brandt is an award-winning playwright, director and producer. She served for six seasons as Artistic Director of Sledgehammer Theatre where she directed over a dozen plays and wrote Berzerkergang, The Frankenstein Project, and NU. She was the Associate Artistic Director of San Jose Repertory Theatre, where she directed Dr. Faustus, Next Fall, The Big Meal, Legacy of Light and Groundswell, among others. As a director, Ms. Brandt’s work has been seen at San Jose Repertory Theatre, the Old Globe, TheatreWorks, La Jolla Playhouse, San Diego Repertory, Santa Cruz Shakespeare, North Coast Repertory, and Arizona Theatre Company. She is the co-adapter of Henrik Ibsen’s A Doll’s House, which had its world premiere at the Old Globe Theatre. Her telematic, multi-site play The Thinning Veil was produced at the University of California, Santa Cruz. Her other plays include The Mechanic’s Daughter, The Waves, and an adaptation of Bronte’s Wuthering Heights. 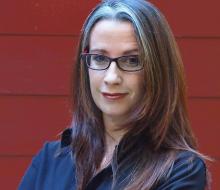