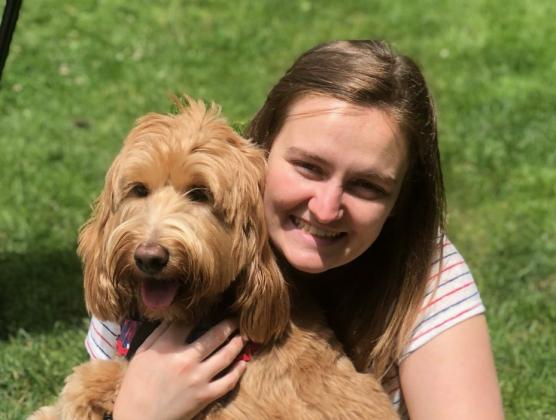 What was your major? Major Theatre & Dance, double minor in French and Managerial Economics.

Did you travel? Studied abroad: France

Any research or projects during your time as a student here? Lyn did the Honors project in her senior year: scenic, costume, and bit of lighting design of French play that she studied in France. She took a stage direction class, focusing on a Moliere play, so she thought to design it since she did direction for it.

Courses/Activities in Theatre Dept? Lyn stage managed mostly, but also took classes in every other area of production/theater. She worked through college as a peer advisor and a company manager, then during the summers working at various places

What did you enjoy about the honors project? The Honors project was different because it was all her design. Since it was not assigned to her, it was all her choice and she was able to spend valuable time learning from Maggie Morgan and John Iacovelli. “Faculty connections are very important.”

“It’s your education, take charge if it. Push yourself and reach out to the faculty, and build a connection with them. Make it your own, try to create opportunities for yourself.”

Any internships/apprenticeships/jobs after college? Right after graduation, Lyn worked at Music Circus as a microphone dresser. From that opportunity, she was able to become Production Assistant/ASM at McCoy Rigby in Los Angeles; from there came back to Sacramento, and worked at the Sacramento Theatre Company. She worked at Music Circus again last summer, then moved to Dallas for an apprenticeship for 7 months, which was a production apprenticeship that focused on stage management. She was a Production Assistant for most shows, but she helped build the sets for one show.

How did you get to work at Music Circus? “I applied to be a Stage Management Assistant.” But the Circus had hired two Equity stage managers, so she took whatever they had for that summer. From working as a microphone dresser, she got to know them, and next year she asked if there was an opening in stage management.

How was the move to Dallas for this apprenticeship? “I rented an apartment blindly. I knew nothing about Dallas,” but she talked to people about any tips on living there. She just packed up and left for her apprenticeship when she received the opportunity.

What did you take away from your internships experience? From Dallas, she learned more about her own stage management style, and was able to learn new ways of doing things, as they differ from city to city, state to state.

What made you like stage managing? “I had so much fun figuring everything out myself – stage management’s what I want to do.” [As a stage manager,] you need to be able to talk to every person, to every department, and know their jargon.”

“I don’t care what I’m doing, I just always want to be in the theater.”

Did you do any other jobs while working in theatre? She had a side job of dog walking to help with extra bills, then she started selling dog bandanas – “Bark in Style Bandanas,” (check out her Instagram if interested). She also worked briefly in the restaurant industry, in retail, and took a bartender class just in case. But in theatre, she knew she wanted to be a part of Equity, so she pulled a list of every theater in the country that offered Equity points, and considered where she’d be willing to move to work for those Equity points. She wants touring experience before obtaining the Equity title.