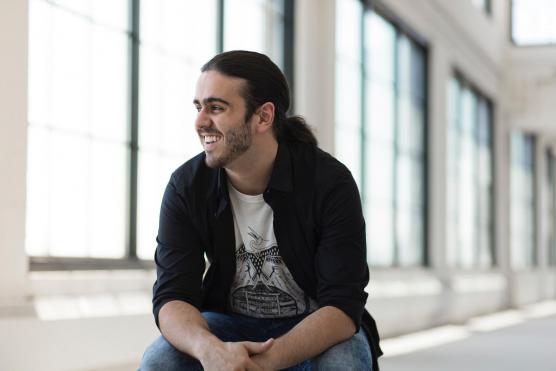 22-year-old Matt Gumley is a musician, writer, actor, and Broadway veteran. He first found his way into New York City’s theater scene when he played Chip in “Disney’s Beauty and the Beast “on Broadway at the age of seven, and now he is here with us at Davis as an instrumental part of the hit new punk rock musical, “Fat Kid Rules the World.” Theatre and dance student Noah VanderVeer-Harris, who cast alongside him in the production, sat down with Gumley for the opportunity to pick his brain about theatre, punk rock, and more.

NVH: Hi there! Good to talk to you.

MG: Good to be here man! Thanks for having me.

NVH: Of course – thanks for coming out to UC Davis!

MG: You know what man, it’s my pleasure. It’s so fun to be here, I’m excited.

NVH: Great! We’re all so excited to have you and your crew out here working with us. So tell me, what have been some of your stand-out moments in musical theater?

MG: I mean, I got to perform at the 30th Anniversary Public Theater Gala with “The Runaways” and they had the whole cast there… I did “The View,” and “Live with Regis and Kelly,” and I’ll never forget those experiences. Doing the talk shows when I was in the show-shows, that was always super cool, like getting to meet Regis…it was really fun. And then the people that came to the shows. Like I remember President Barack Obama came to “The Addams Family,” or one of those shows? I remember he was there, and the kids were there, and it was like “Woah dude, this is crazy, we’re performing for Obama! So cool, the president.”

NVH: Those are definitely extraordinary experiences. So how did you come to being in “Fat Kid Rules The World?” How did you meet the writers, how did you meet Cole [Ragsdale, playing Troy Billings], how did this all come together?

MG: Short and sweet, I was cast in the show as Curt about two years ago. And there were other writers at the time; they had their own versions of the music and script at that time, and I had done a couple of workshops after being cast with Cole – we were cast at the same time. Through one thing or another, the creative differences happened and our director Marc [Eardley] came to me and said “Hey, you write music, right?” and I said “yeah…?” and he said “Would you maybe want to write some stuff for the show?” and I said “Yeah, sure!”, so I spec’d four songs for the show, and he said “Great, do the rest”. We got a co-composer to come on board to help out with some of the other stuff, but I did most of the music and Marc and I have just been building this thing with Jay [Falzone, co-composer], who he brought on board shortly after he brought me on board, and we kind of just hit the ground running. Within a couple months, we had already done a couple readings, and within six months we found our producer who bought our option that eventually brought us here.

NVH: I have to say, the music is fantastic.

MG: I appreciate it man. I’m glad that people are having fun; that’s my main thing. The music’s fun for me, I enjoyed writing it, but when it’s fun for other people to do, that makes me feel really good.

NVH: Well y’all have put a wonderful thing together and it’s just been really cool to work on. I think it’s going to be well received.

MG: From your lips, man.

NVH: Hoping so my friend. I’ve got a lot of people excited to see what it’s all about and it’s going to be exciting to hear their responses. Moving forward, what was your favorite song that you wrote, or are looking forward to performing?

NVH: Thank you, I wrote it myself!

MG: Hahaha! Favorite song in the show… I think Guts And Pie. I remember writing that moment and feeling like it was really really special because it was the first time we got, uh, justification for a lot of things we’d been looking for in Troy’s character, but also to see a little bit more of the impression that Curt and the band make on Troy and how receives that whole experience. It’s the first time we show Troy belonging, really, in his own skin, and in the skin of people around him.

NVH: Nice nice… Ok. Now about your interests, your love of theater… What are your favorite productions that you’ve seen live?

MG: My favorite shows of all time? “West Side Story” is probably top of the list…

NVH: My step-mom would love you.

MG: Hahaha, word! I’ve seen like 20 productions of it between high schools and colleges, and the revival I saw a couple of times and I know they’re bringing it back again. I’ve never gotten tired of it. I don’t get tired of it. I don’t get tired of the music – the music is so cool and different and distinct to the 60s, but not at the same time… It’s one of those shows that’s just great. Um, a controversial opinion: I think “Les Miserables” is amazing, a beautiful show, and when done right it’s a masterpiece.

NVH: Can I ask why it’s controversial to you? I haven’t heard that before.

MG: Yeah. Um, if I could just have a moment to talk about my favorite composers because there’s so many cool composers in musical theater, like Sondheim is one of my favorites; Jason Robert Brown is so [underappreciated]… his pop sensibility and his storytelling sensibility is impeccable. He and Andrew Lippa, they’re both great.

NVH: Fantastic choices. On a similar note, what are your favorite punk bands of all time?

MG: Green Day. And that’s like, if anyone heard you said “punk” and I said “Green Day”, they’re gonna shoot me in the leg.

NVH: True. We’ll put it at the bottom.

MG: We’ll put that at the very very bottom hahaha. But, I do love Nirvana, and not just “’Smells Like Teen Spirit,’” goddammit. Because that’s all anyone knows – it’s like “Oh yeah, Led Zeppelin, I love him!” Lithium, and Heart-Shaped Box, and the whole “Unplugged” thing was really cool. Even “No FX” and the couple songs “The Darkness” put out. “Blink-182:” great. “Weezer:” great. All that stuff.

NVH: Solid! Alright, last question for you – take this however you want to – Why is this show important? Why should people come see it? Why should it stick around? What do you hope people will take from this?

MG: I’ll tailor [my answer] to the industry itself. To Broadway itself, and the way that musicals are done. The way we’re doing this is very inorganic, and, uh, on the business side and on the backend side, for creators and people who want to do this, we want to be the show that proves you don’t have to incubate your show for ten years in order to get it on Broadway. If you write a good show with a lot of heart and a good score, it’ll get recognized and people will like it, so don’t feel like because you haven’t done something the A, B, and C way that is the norm, doesn’t mean that you can’t make something awesome. Because we did not do things the normal way here, because we knew this thing was going to be really cool and we all felt it. We just had this vibe that like, there’s something about this show for all of us, that we all just feel really tied to personally, and emotionally it’s, it’s a great show, and that goes into what I want people to get out of it. The message is in the show: don’t feel the need to ride in the center lane and be in the norm; it’s alright to be in your skin, and be just the right size, whatever that means to you. You are just the right size, in whatever capacity that is. Everyone is just the right size, no matter who you are.

NVH: Cool, thank you for your time today Matt!

MG: Thank you for your time man! Appreciate it.