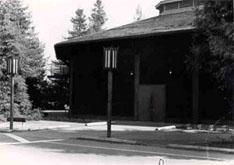 Wyatt Pavilion Theatre faces south, with the ticket window and main public entrance giving directly onto Visitor Parking Lot Number 5. Wyatt Pavilion is one of the few original structures still standing on the UC Davis campus. Built in 1907, the Judging Pavilion, as it was then called, could accommodate 500 people (the campus had 23 students at the time) and sat on what is now the southeast corner of Peter J. Shields Avenue and East Quad.This location meant that livestock being taken to the Pavilion for judging had to traverse the entire campus on their way from the animal barns.In the early 1920s, the Judging Pavilion was moved next to the barns, and the parade of hogs, cattle, sheep, and horses ceased.

As Davis evolved from the University Farm to a general campus of the University of California, most of the original buildings were destroyed to make way for new construction. The Judging Pavilion, on the site of a proposed new physical sciences building, was slated to be torn down. Retired Gerbers executive Fred S. Wyatt (son of Marcus O. Wyatt of Winters, who at the turn of the century had helped choose the site for UC Davis) was then a special assistant to Chancellor Emil M. Mrak. Wyatt had a strong feeling for history and thought that the Pavilion building should be preserved. His generous contribution made possible the moving of the building and its conversion into a theatre at its present location.

The historic building retains its original rustic, dark brown, wood-shingled exterior. Clifford C. Fellage of the Dramatic Art department designed the interior, which is a flexible, open-stage arrangement with seating on three sides, similar to the Stratford, Ontario Shakespearean Festival Theatre. The December 1963 opening was timed to mark the quadricentennial celebration of Shakespeare’s birth, and the inaugural performance in the new theatre was Shakespeare’s The Tragedy of King Richard II, directed by Alan Stambusky. At the opening, University officials proudly pointed out that Wyatt Pavilion was then “the only campus theatre in the US designed for the presentation of plays as they were enacted in Shakespeare’s day.”

Chancellor Mrak noted that the new theatre proved “the campus has advanced to a new stage in its evolution into a truly general campus. … [Wyatt Pavilion] stands today as a memorial to our great agricultural heritage, as a symbol of our dedication to the arts, and as a constant reminder of our duty to future generations of students and Californians.”

Wyatt Pavilion Theatre seats 200 people around its thrust stage. The stage has a permanent architectural façade, passageways beneath the thrust portion of the stage, traps that can be opened in several places to provide levels and downstage entrances, an inner stage, and an upper level that can be closed with sliding panel doors or curtains. The theatre includes two 10-person dressing rooms. A new lighting grid was installed in 2001. The theatre uses an ETC Expression console and 78 dimmer-per-circuit sensor dimmers.