Former UC Davis professor of theatre and dance, costume design, Phyllis J. Kress of Sacramento, California, passed away on Sunday, July 10, 2016, at 77 years of age. Kress retired in 1998 after 32 years at UC Davis.

During her tenure in the Department of Theatre and Dance, Kress designed costumes for over 100 productions giving life to numerous characters onstage in beautifully crafted garments. A gifted but strict educator, she mentored hundreds of students during her three-decade career at UC Davis including Maggie Morgan, current professor of theatre and dance, costume design, and Roxanne Femling, costume shop director.

In the classroom, Kress instilled in her costume design students the value of doing intensive research and problem-solving. “We spend a lot of time trying to solve the mystery of how people created their clothing,” said Kress in an interview for The California Aggie in December 1996.

William Kleb, professor emeritus theatre and dance, stated, “I too am saddened by the news about Phyllis Kress. I never worked directly with her, but I remember her well. She was a constant, positive presence in the life of the department when I was there. Bob Fahrner [chair emeritus of theatre and dance] often told me how much he trusted her, and valued her work. She was one of those steady, reliable hands behind, and, literally, below, the scenes, helping to hold things together, to get our ‘children’ dressed and up and out on stage—and teaching all the while. One of those people—calm, friendly—who always did ‘a good job.’ I have many, many memories, even at my age, of my many, many years at Davis: she is one of the good ones.”

Kress was born in Grand Rapids, Michigan, in 1938. She received her training at Aquinas College, University of Wisconsin at Madison. Prior to her appointment at UC Davis, she worked as a costume designer at the Cleveland Playhouse and taught costume design at Penn State University.

After retiring from UC Davis, she lived quietly in the Land Park neighborhood of Sacramento, where she took in rescue animals. In her remaining years, Kress pursued her love of art and created many beautiful paintings which were exhibited at numerous galleries in the Sacramento area. 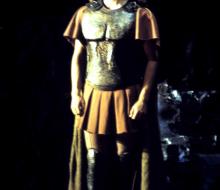