Gyöngy Laky, San Francisco sculptor, is a past recipient of a National Endowment for the Arts Fellowship, she was also one of the first textile artists to be commissioned by the Federal Art-in-Architecture Program. Laky’s work is in many permanent collections including the San Francisco MOMA, The Smithsonian’s Renwick Museum of American Art, the Philadelphia Museum of Art, the Oakland Museum, the Contemporary Museum in Honolulu and others. She exhibits her work nationally and internationally.At the 11th International Triennial of Tapestry, Poland in 2003, she was awarded special distinction for her sculpture protesting the Iraq war, “Globalization,” (now in the Central Museum of Textiles’ permanent collection).

She is one of a team of three who developed a comprehensive Arts Master Plan for the new state-of-the-art, 130 acre, Federal Food and Drug Administration campus being built in Maryland. In 2003 Telos Arts Publishing of U.K. published, “Portfolio Series: Gyngy Laky,” and the Bancroft Library at the University of California, Berkeley, released her oral history.

The Smithsonian Institution is currently assembling a collection of Laky’s personal papers, photographs and documents at the Archives of American Art.

Laky studied at UC Berkeley (B.A., 1970 and M.A.,1971). Postgraduate work followed with the UC Professional Studies in India Program. Upon her return, she founded the internationally recognized Fiberworks, Center for the Textile Arts, in Berkeley where she established accredited undergraduate and graduate programs in the mid-1970’s. Though she is an artist and academic, she is also an activist. In 1999, working with Senator Jackie Speier in the State Legislature and organizing UC professors statewide, she engaged in launching a major effort to increase the numbers of women academics and to diversify the ranks of tenure track faculty throughout the UC system. Over 20 years ago she initiated establishing the Department of Environmental Design at UCD and later developed its graduate program in Textile Arts and Costume Design.

She chaired the Department of Art in the economically turbulent mid-1990’s. A long time environmentalist, she initiated a number of courses addressing environmental issues in textiles, design and art in the years prior to her retirement from teaching in 2005.

gslaky[remove-this-and-replace-with-at]ucdavis.edu
Back
This item appears in: 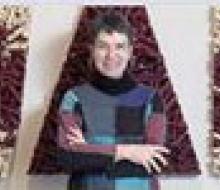