Alexander Boyd graduated from the University of California at Davis Graduate Program in Performance Studies in June 2014. His dissertation, “The Sustainability of Traditional Knowledge Systems: Embodied Learning through Practice, Teaching and Application,” draws on 20 years of professional practice and teaching in Daoist Qigong arts (Daojiao Lishi Quanfa) that he has studied since 1985 with his main teachers Chee Soo (who passed in 1994) and Desmond Murray. The central practice of his dissertation was to develop the few degree programs in the West that value the learning inherent to Eastern embodied practices.

In 2000 Boyd began developing, resourcing, and evaluating applied community arts intervention projects that teach Daoist embodied practices to disadvantaged groups including: young people not in education, employment or training or at risk of being excluded from education; adults in low skilled work or unemployed, including travelers, minority groups, and people with learning difficulties or disabilities; seniors at risk of falling and other often hard to reach groups. As well as resourcing substantial grant funding to support this work between 2000 and 2011, he was involved in the establishment and management of the company, project and fund administration, and community teaching. During this time he re-established the Lishi Daoist Qigong arts in London where he continues to train-the-trainers and develop his interests in helping people found charities and run not-for-profit organizations.

Since the early 1990s he has performed in, choreographed, and produced many innovative artistic works from on-street cultural performances to solos at international venues. At the 2006 Big Dance Dancing in the Street event, a new world record was created when 752 dancers performed 44 different dance styles including the Lishi Daoist Qigong arts. Boyd performed in (1995), choreographed (2000), and co-produced (2005) the Sport and Recreation Alliance (formerly CCPR) signature “On Show” events that featured a vast array and collaboration of movement and dance styles. For the London 2012 Cultural Olympiad he authored, co-directed, and performed in a signature IMove “Improvised Pop-Up” where the Daoist Lishi arts performed with contemporary dance company Phoenix Dance during a break in an international cricket test match at Headingley Stadium.

Boyd has trained many people who have gone on to teach the Lishi Daoist Qigong arts themselves in Leeds, Leicester, and London, and outside of the United Kingdom where he has also taught since 1991.  Since undertaking his master’s degree at Leeds Carnegie College and his subsequent Ph.D. at UC Davis, Boyd has trained professional athletes including elite sports people from the Leeds Rhinos rugby league team, swimmers, climbers as well as many others from professional dancers, to musicians, opera singers, and chief executives.

Since 2003 he has regularly worked and collaborated with leading performers and directors in Chinese opera, wushu and Daoist arts in China.  More recently since 2015 he has been collaborating on performance as research with embodied artists from various indigenous cultural practices from India, Hawaii, South America, Africa, and California. He is currently working from his U.K. base as a Research Associate with UC Davis Theatre & Dance to explore how Asian training in Daoist Qigong energy and breath work enhances acting and performance. As founder of the Embodied Research Working Group for the IFTR (International Federation for Theatre Research), he has created an Intercultural Roots (for Embodied Practice Research) organization. This organization aims to further health, well-being, and personal growth by fostering collaborations between embodied practitioners and teachers from around the world in partnership with researchers, policy makers, and funders. He currently travels internationally to present, collaborate, and develop his practice, performance work and research, at invited seminars, conferences, workshops, and in publications.

amcboyd[remove-this-and-replace-with-at]ucdavis.edu
Back
This item appears in: 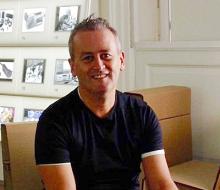