The Merchant of Venice Presented by SOS (Shakespeare On-a-Shoestring) 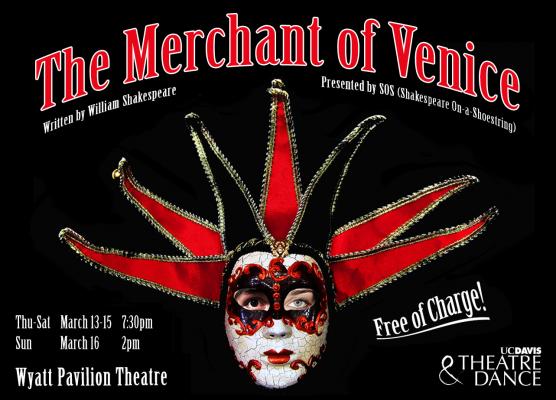 Shakespeare’s The Merchant of Venice is full of intrigue, love and courtroom drama centered on the much-maligned moneylender Shylock and the lawyer-in-disguise, Portia. Journey to Venice — and choose the right casket!

This is the second production of the UC Davis Department of Theatre and Dance’s SOS (Shakespeare-On-a-Shoestring) troupe. In the manner of Shakespeare’s ‘rough magic,’ sets and costumes are at a minimum with maximum drama and audience engagement.

SOS was formed in 2012 when Department of Theatre and Dance productions were threatened by financial cuts. Professor Bella Merlin then originated SOS to create more acting opportunities for dramatic art students. The SOS mission is to create immediate drama that stirs, delights and entertains through the Bard’s classic works.