Colin Milburn’s research focuses on the relations of literature, science, and technology. His interests include science fiction, gothic horror, the history of biology, the history of physics, nanotechnology, video games, and the digital humanities. He is a member of the Cinema and Digital Media Program, the English Department, the Science and Technology Studies Program, and the Center for Science and Innovation Studies. He is also affiliated with the programs in Cultural Studies, Performance Studies, and Critical Theory, as well as the W. M. Keck Center for Active Visualization in the Earth Sciences (KeckCAVES). Since 2008, he has been serving as the director of the UC Davis ModLab.

Professor Milburn holds the Gary Snyder Chair in Science and the Humanities. He was named in 2012 as the inaugural recipient of this new endowed chair, which is supported by a $1 million endowment from the estate of late high-tech entrepreneur Charlie Soderquist, a UC Davis graduate and former University of California regent. He was an admirer and friend of Snyder, a professor emeritus of English and Pulitzer Prize-winning poet, essayist and environmental activist for whom the chair is named. Read more about the Gary Snyder Chair here.

The multi-gifted Colin Milburn, Gary Snyder Chair in Science and the Humanities, Professor of Cinema and Digital Media, Professor of English, Science and Technology Studies, has provided some keen advice on gaming and its costs on the WalletHub website. Milburn is featured as part of the site’s Ask the Experts section. Scroll down for Milburn’s advice.

Physics Today recognizes Mondo Nano, by Cinema and Digital Media professor Colin Milburn, as one of the most intriguing books reviewed in its pages this year.

The year in reviews: Five books that stood out in 2015

The UC Davis ModLab is an experimental laboratory for media research and digital humanities. The lab is developing new tools and methods to address the challenges faced by scholars working at the intersection of the humanities, the sciences, the social sciences, and the arts. Focusing on new media technologies and processes of modification, the lab offers a dynamic and collaborative environment for post-disciplinary modes of research.

We are pleased to announce the publication of Professor Colin Milburn’s new book, Mondo Nano: Fun and Games in the World of Digital Matter (Duke University Press, 2015). Milburn takes his readers on a playful expedition through the emerging landscape of nanotechnology, offering a light-hearted yet critical account of this high-tech world of fun and games. The expedition ventures into discussions of the first nano cars, the popular video games Second Life, Crysis, and BioShock, international nanosoccer tournaments, and utopian nano cities.

A new book by Colin Milburn, faculty in Cinema and Digital Media, is featured in an article on the UC Davis website, “Where science and video games meet.” Read the article by Jeffrey Day and watch a video of Prof. Milburn discussing how gaming affects science at UC Davis Today (May 29, 2015). 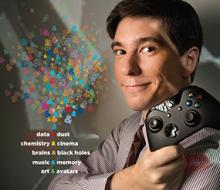