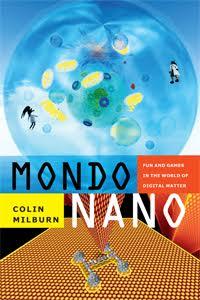 We are pleased to announce the publication of Professor Colin Milburn’s new book, Mondo Nano: Fun and Games in the World of Digital Matter (Duke University Press, 2015). Milburn takes his readers on a playful expedition through the emerging landscape of nanotechnology, offering a light-hearted yet critical account of this high-tech world of fun and games. The expedition ventures into discussions of the first nano cars, the popular video games Second Life, Crysis, and BioShock, international nanosoccer tournaments, and utopian nano cities. Along the way, Milburn shows how the methods, dispositions, and goals of nanotechnology research converge with video game culture. With an emphasis on play, scientists and gamers alike are building a new world atom by atom, transforming scientific speculations and video game fantasies into reality. Milburn suggests that the closing of the gap between bits and atoms entices scientists, geeks, and gamers to dream of a completely programmable future.

Colin Milburn’s research focuses on the relations of literature, science, and technology. His interests include science fiction, gothic horror, the history of biology, the history of physics, nanotechnology, video games, and the digital humanities. He is a member of the Cinema and Digital Media Program, the English Department, the Science and Technology Studies Program, and the Center for Science and Innovation Studies.