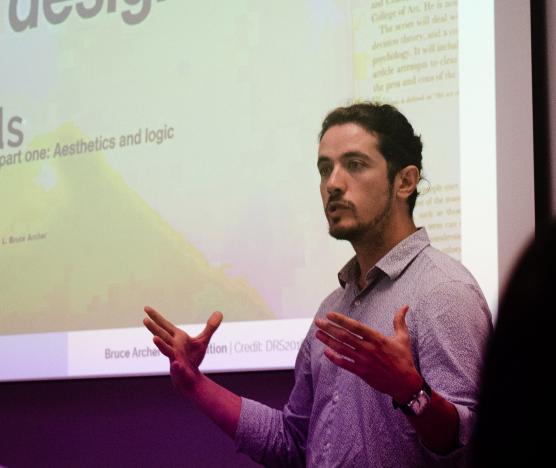 Jean was a lead designer and illustrator until 2014, when he moved to the US to study Digital Interactions and UX Design. Since then he has developed himself as a Visual Designer interested in articulating design decisions, rationally considering projects’ function before their form. During his time at UC Davis, he has proven to be extremely motivated and empathetic with his student’s learning goals—through his classwork, his TA positions, and his participation in the newly founded Prototyping Lab.

Jean has published articles in international peer-reviewed journals, most recently “Tinkering Methods: Primordial thoughts in Design Thinking,” presented at the 22nd International Conference on Engineering Design (ICED 19). Also in 2019, Jean was one of 16 graduate fellows selected from all over the world to participate in the Symposium “Useful Fictions” in Paris, where he worked with scientists from the Parisian École Polytechnique in a seven-day deep dive to represent scientific discoveries visually, which culminated in a group exhibition at the Montmartre in Paris.

Jean’s inspiration has always revolved around new technologies and how they can ease our interaction with the world. His thesis comes from an interest in psychology, philosophy, design thinking, and new technologies observing possible futures toward easing the communication toward death and helping those who are looking for solace in their grief.

Sprocket Building, Room 209B
jhmenezes[remove-this-and-replace-with-at]ucdavis.edu
Back
This item appears in:

This student profile has been archived and may contain content that is out of date.
Student Profile
October 12, 2018 College in Brazil, Bachelor of Arts and Sciences, Graphic Design 2012City College of San Francisco, digital Design for the New Media 2015
Sprocket Building, Room 209B
jhmenezes[remove-this-and-replace-with-at]ucdavis.edu