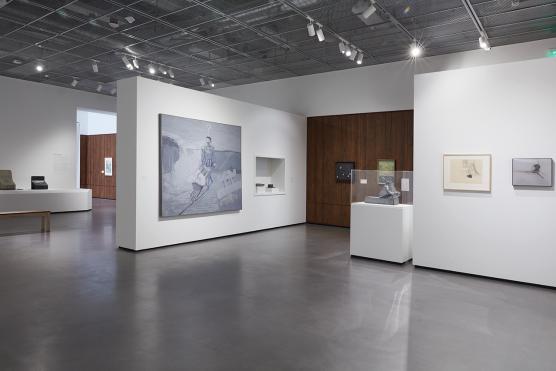 Under the supervision of Professor Tim McNeil and curator Dan Nadel, graduate student Edward Whelan designed the floorplan, environment and graphics for the exhibition “All on the Line: William T. Wiley and the Slant Step” at the Jan and Maria Manetti Shrem Museum of Art. This exhibition highlights Wiley’s influence as an artist and educator, as seen through recent contributions from world-famous artist Bruce Nauman.

Whelan collaged Wiley’s own hand-drawn lettering for the title graphics, disrupted the white walls in the galleries with wood paneling to symbolize Wiley’s rejection of the mainstream artworld, and used Wiley’s watercolors to create a 14 ft “stained-glass” window using transparent vinyl inside the Shrem. The chronological layout culminates in Wiley’s major renunciation of the art world in 1967, expressed with a small wood-paneled gallery reminiscent of a chapel.

The exhibition runs through May 8 at the museum.

Edward Whelan comes to Davis from Tulsa, Oklahoma, where he worked as an exhibition designer for the Philbrook Museum of Art. While working on a number of exhibitions at Philbrook, Whelan became interested in co-design and how those methods could be brought into museums. With close to 10 years experience in the museum field, Whelan plans to continue his relationships with museums and will be the lead designer for the upcoming “All on the Line: William T.