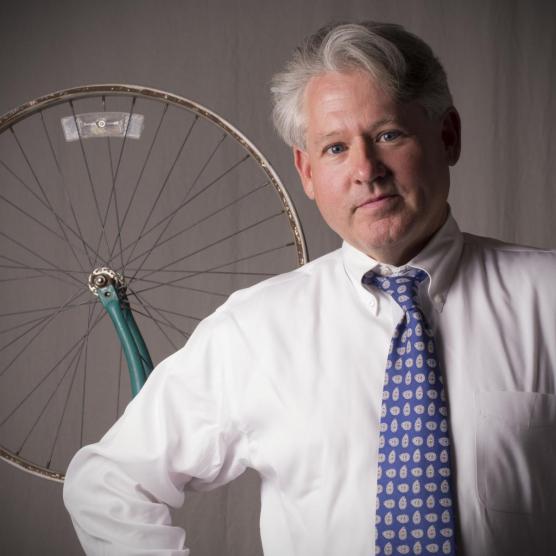 James Housefield, associate professor of design, received the Phi Beta Kappa Teaching Excellence Award at a ceremony in Berkeley on May 5, 2019.

Housefield was one of two College of Letters and Science faculty members honored at the event. David Olsen, assistant professor of chemistry, was also recognized with the teaching award.

Presented by Phi Betta Kappa Northern California Association, the prize recognizes excellence in teaching and the ability to inspire intellectual and personal development in and beyond the classroom. This may include, but is not limited to, encouraging critical, analytical and creative thinking, taking an active interest in students as individuals, and influencing the way students think about the world.

“Pursuing my cognitive science degree and dreaming of double majoring in design, I took the course DES 001: Introduction to Design, a class that I can only imagine Dr. Housefield teaching,” said undergraduate student Cindy Cheung. “This was the turning point of my career, where I could feel that my true desire to be a designer might actually be in reach. Housefield’s composed, yet slightly eccentric and definitely unabashed lecturing style made me excited not only to be in the class, but also to learn about just what a successful designer could be.”

Affiliated faculty in art history, French and performance studies, Housefield received the UC Davis ASUCD Excellence in Education award for the Division of Humanities, Arts, and Cultural Studies in 2011. His prior recognitions include the National Endowment for the Humanities Distinguished Teaching Professor in the Humanities (2006-2009), Presidential Award for Excellence in Teaching, and the Faculty Senate Teaching Excellence Award at Texas State University, San Marcos. He was named a Piper Professor, the most competitive teaching award in the state of Texas.

He is the author of “Playing with Earth and Sky: Astronomy, Geography and the Art of Marcel Duchamp.”