Andrew Smith is a screenwriter, filmmaker and educator who grew up on a ranch in Montana. His feature film Walking Out, which he made with his twin brother, Alex, was nominated for the Grand Jury prize at the 2017 Sundance Film Festival. Walking Out stars Golden Globe winner Matt Bomer (The Sinner), Josh Wiggins (Hellion), Bill Pullman, (Lost Highway) and Indie Spirit nominee Lily Gladstone (Certain Women). IFC Films distributed the critically lauded, award-winning film.

The Smith Brothers wrote, directed and produced the feature film Winter in the Blood, which stars Chaske Spencer (Twilight), Julia Jones (Wind River) and multi-Tony-nominee David Morse (The Green Mile). Adapted from James Welch’s landmark First Nations novel, the film depicts the tragicomic odyssey of an Indian Cowboy which ultimately leads him to his true name, his spiritual power, his blood.

The Smith Brothers also wrote and directed The Slaughter Rule, starring Ryan Gosling, David Morse, Clea Duvall and Amy Adams, which was also a Sundance Grand Jury nominee. It focuses on a young man who must decide if his football coach is falling in love with him—while coping with toxic masculinity and rural existence.

Andrew and Alex are currently writing American Radical, a feature film based on a true story about a Communist cowboy bootlegger, and The Better Angel, a film about Walt Whitman and his service as a wound-dresser to Union soldiers during the Civil War. They are also attached to direct a feature film adaptation of the bestselling non-fiction book Night of the Grizzlies. They recently wrote TV pilots The Brief History of the Dead for Amazon, and The Darklings for Red Arrow in Germany.

Andrew taught in the Media Studies Program at the University of Montana (2005-2015); previously, he taught at the University of Iowa (where he received an M.A. in Film Studies, and an M.F.A. in poetry from the Writers’ Workshop). He lives in San Francisco with his wife and two daughters.

The Department of Cinema and Digital Media presents the CDM Lecture Series, a four-event series featuring presentations by acclaimed and award-winning filmmakers, artists, scholars and curators. The series is hosted and coordinated by Professors Fiamma Montezemolo and Andrew Smith.

This course introduces students to the practice of screenwriting. We examined the classical three-act structure in the various traditional fiction genres. We develop character, dialogue, story arc etc. However, we go further and experiment with alternative  narrative structures. We create styles of “writing” with images and music that break the conventional standard of what Peter Watkins refers to as the “mono-form”. 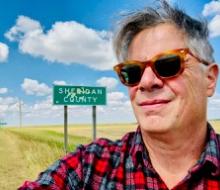