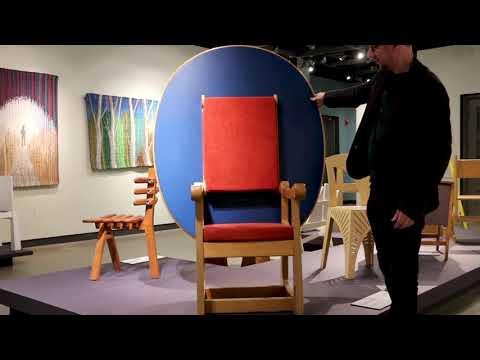 The exhibition opens at the UC Davis Design Museum on Jan. 22 and runs through April 21. “Weaving and Woodwork” is co-curated by Tim McNeil, professor of design and director of the Design Museum, and Ann Savageau, professor emerita of design.

While at UC Davis, Helge’s research and creative work reflected his conviction that design should be universal and serve everyone. He served as the creative director for design studios in Sweden and the United States, where he designed residential and commercial interior architecture. Helge received numerous awards and recognition for his furniture designs and commissioned architectural projects, including the 1992 renovation of the International House in Davis. His work designing play environments for children with disabilities includes Enchanted Hills Camp in Napa commissioned by the LightHouse for the Blind and Visually Impaired.

Inspired by Helge’s legacy and for her undergraduate honors project on accessible design, student Zoe Martin in conjunction with the museum, has made aspects of this exhibition available for people who are visually impaired and blind — an audience often overlooked. This research is part of a larger project to investigate best precedent design solutions to make UC Davis museum spaces accessible for all audiences. As a result of this research, certain exhibition components may change throughout its display.

Birgitta’s professional career began as a freelance graphic designer for interior, industrial, and textile design projects. While raising her family, she bought a Glimakra loom — which she still owns today—and taught herself tapestry weaving. Birgitta has received multiple awards and commissions for her tapestries, which hang in private residences and notable public spaces such as meeting rooms on the UC Davis campus and the chambers at Davis City Hall.

“Their work typifies Scandinavian resourcefulness and themes. What today we would call sustainability was historically a matter of practicality and economy,” said McNeil. “Birgitta’s tapestries use woven cotton strips that traditionally would have come from discarded clothes and other household fabrics. Helge’s furniture maximizes material with very little waste, and many of his pieces have more than one function such as the step stool that turns into a high chair for toddlers.”

There will be an opening reception and a presentation by Kjetil Fallan, guest scholar in the Department of Design and a leading scholar on Scandinavian design, on Jan. 24 beginning at 6 p.m.

The Design Museum, part of the College of Letters and Science, is in Cruess Hall, Room 124. It is free and open weekdays noon to 4 p.m. and Sundays 2 to 4 p.m.

For more information about this exhibition, visit arts.ucdavis.edu/design-museum.