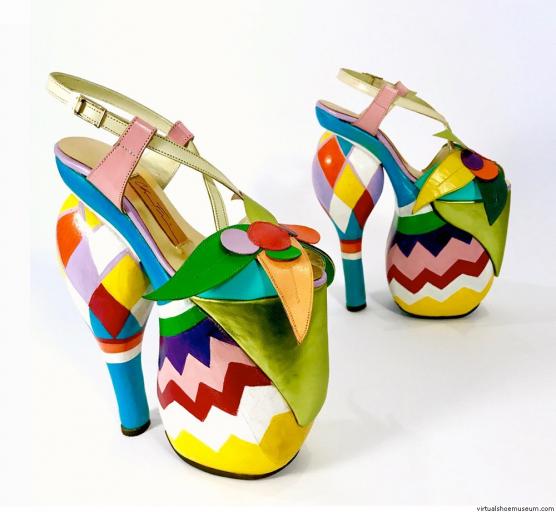 The UC Davis Design Museum takes a bold step with the exhibition “From Concept to Creation: Inspired Shoe Design by Chris Francis,” which showcases the colorful and imaginative footwear created by the Los Angeles-based shoe designer. The exhibition runs Jan. 23 through April 23, 2023, with an official opening on Jan. 24 at 6:30 p.m.

“When I saw Chris Francis’ ornate Slipper shoe on the cover of Ornament Magazine in 2015, I knew we had to bring his work to the Design Museum,” Avila said. “His work demonstrates extraordinary craftsmanship that builds on principles of industrial design and fashion, and his use of repurposed materials promotes sustainability, which is an important component of our UC Davis design major.”

Francis began his career as an artist and carpenter, then started creating footwear worn by Mötley Crüe’s Mick Mars, Steve Jones of the Sex Pistols, and former Runaways guitarist Lita Ford. After seeing a shoemaker hand stitch shoes at a Los Angeles Louis Vuitton event in 2011, Francis was determined to teach himself shoemaking and sought out traditional shoemakers for apprenticeships. Without a proper leather sewing machine, he did all the work by hand and still occasionally works that way. While Francis frequently creates shoes for celebrities and high-profile clients, his true passion is utilizing his unique skills to conceptualize his artistic vision. In addition to showcasing over 65 pairs of shoes that stand alone as remarkable art objects, the Design Museum exhibition will highlight his inspiration and process, including examples of tools and machines and a glimpse into his studio.

“It is a joy to help curate and design this exhibition,” Gomez said. “Walking into his Los Angeles studio is like going back in time to 1930s­–1950s old Hollywood. Francis inherited celebrity shoemaker and mentor Pasquale Di Fabrizio’s shoe lasts — the Di Fabrizio shoe boxes, which cover the walls of Francis’ studio, include names like Lauren Bacall, Barbara Stanwyck and Joanne Woodward. Francis continues Di Fabrizio’s tradition of bespoke shoes while demonstrating that inspiration can come from just about anywhere.”

The Design Museum, part of the College of Letters and Science and free to the public, is in 124 Cruess Hall. It is open weekdays from noon to 4 p.m. and Sundays by appointment.

For insight into Francis’ creative process and work, view this short KQED film.

Cristina (Cris) Gomez is an M.F.A. Design student at the University of California, Davis. Her academic background includes Literature, Cinema, and Fashion studies of 1930s America.

Cristina’s area of focus is on costume exhibitions and on the analysis of clothing’s social role. Her planned thesis project is an exhibition on the Central Valley of California’s field workers’ clothing to discuss their working social conditions.