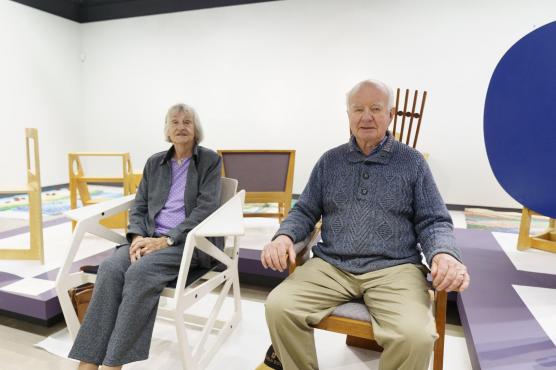 Helge Olsen, professor emeritus and a founding member of the UC Davis Department of Design who was widely recognized for his furniture design, died on July 11. He was 86.

Olsen’s research and creative work reflected his conviction that design should be universal and serve everyone. He worked as the creative director for design studios in Sweden and the United States, where he designed residential and commercial interior architecture. He received numerous awards and recognition for his furniture designs and commissioned architectural projects, including the 1992 renovation of the International House in Davis. His work designing play environments for children with disabilities includes Enchanted Hills Camp in Napa.

The UC Davis Design Museum exhibited the work of Helge Olsen and his late wife Birgitta with an installation “Weaving and Woodwork: A Scandinavian Design Partnership” in 2019. It showcased his furniture and her woven wall tapestries, which reflected their Scandinavian upbringing, training and design aesthetic.

The exhibition was co-curated by Tim McNeil, professor of design and director of the Design Museum, and Ann Savageau, professor emerita of design.

“Their work typifies Scandinavian resourcefulness and themes; what today we would call sustainability was historically a matter of practicality and economy,” said McNeil. “Helge’s furniture maximizes material with very little waste, and many of his pieces have more than one function such as the step stool that turns into a high chair for toddlers.”

Here is a brief video about “Weaving and Woodwork.”

Olsen joined UC Davis in 1967 as an instructor in what was then the Department of Environmental Design and eventually served as chair. During his tenure at UC Davis, he was honored with the Magnar Ronning Award for Teaching Excellence. He retired in 2004.

In 2005, the late Jo Ann C. Stabb, professor emerita and namesake of Design Collection, interviewed Olsen about his career for the UC Davis Emeriti Association.

Olsen grew up in the Ordrup suburb of Copenhagen, Denmark. He received his diploma in furniture and interior architecture from School of Interior Design Copenhagen.

He is survived by his sons Henrik and Erik, daughters-in-law Deborah and Elodie, and four grandchildren, Caroline, Christian, Aela, and Julien.