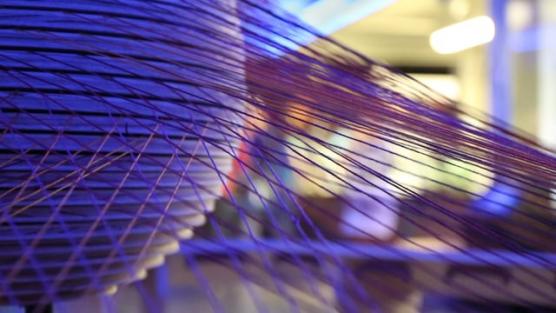 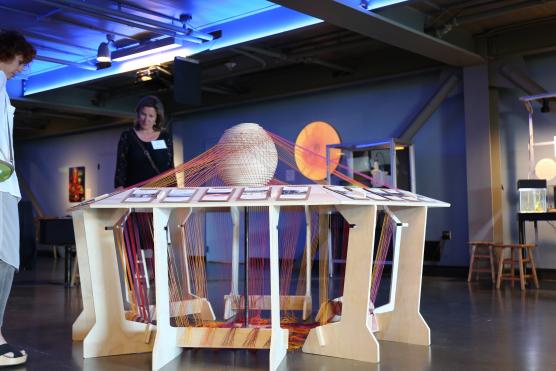 Recently, more than 200 UC Davis scientists and supporters gathered at the OneClimate event to showcase the university’s collective strength in climate science research in the areas of science, engineering, and a team from the Department of Design, led by Thomas Maiorana, an assistant professor.

Maiorana’s project illustrated to tangible and graceful effect the university’s connections through a design installation. It featured threads extending from its center and tying to points around a circle representing different UC Davis departments, colleges and centers that focus on climate science and the environment.

Maiorana was aided in the creation of the installation by Victoria Baird, an MFA candidate in Design, Ben Houlton, the Director of the John Muir Institute for the Environment, Vida Mia García, Ph.D., principal, Red Cover Studios, and two undergraduate students Suhaila Sikand and Sandra Bae.

During the OneClimate event, a variety of faculty-created exhibits peppered the venue’s space. Guests learned about sea level rise in the Bay Area and severe sediment loss in the Sacramento-San Joaquin Bay-Delta. They ate oysters and learned about how ocean acidification is affecting oysters’ ability to form shells. They used virtual reality to experience — as UC Davis scientists did in actual reality — flying over the 2015 natural gas leak at Aliso Canyon and watching the methane levels spike. They learned about climate smart agriculture, used an interactive quiz to test their climate science knowledge, and more.

“We’re all in this together,” Houlton said, speaking of both the local and global community. “Some people talk of winners and losers. There are no winners and losers in this game. When people in Somalia can’t grow food, nobody wins.”