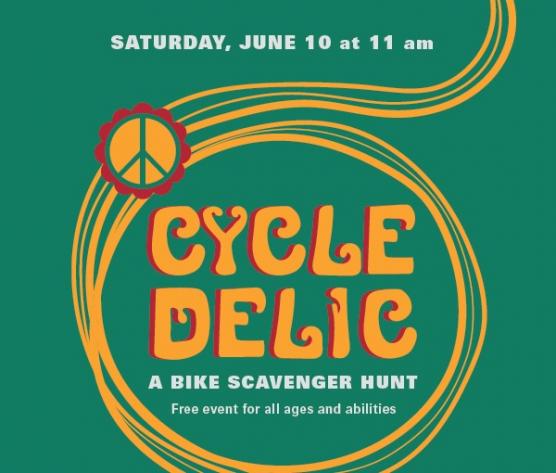 Be a part of “Cycle-delic: Davis Bike Scavenger Hunt,” a public bike scavenger hunt in the City of Davis that celebrates 50 years since the installation of the first bike lane in the U.S. in 1967. The hunt was devised by students from the DES 187 Narrative Environments course in the UC Davis Department of Design under the supervision of Professor Tim McNeil, Teaching Assistant Jennifer Cadieux and City of Davis Bicycle and Pedestrian Coordinator Jennifer Donofrio.

The bike scavenger hunt features 18 clues leading participants to mixed-media activities, interventions and games throughout the city. Participants of all ages and riding skills are welcome and completion of all activities is optional. After the scavenger hunt participants will return to Hot Italian for the chance to win prizes. The activities respond to a commemorative 1960’s era theme and the Davis community.

The City of Davis is known for its robust bicyclist community. In the early 1960s, with the growth of Davis and UC Davis, conflicts between bicyclists and vehicles increased, sparking petitioning by residents for bicyclist safety accommodations. By late July 1967, the very first official bike lane in Davis and in the United States was created on 8th Street between A Street and Sycamore Lane. It was the first time that a lane for the preferential use of bicyclists had been designated as part of an existing roadway meant for vehicles.

This project was authored, designed and produced by students participating in the DES 187 Narrative Environments course.  Narrative environments are public spaces that are designed to communicate a story, deliver a message, provide entertainment, create a sense of place, or sell a product. Examples include exhibitions (museum or trade show), transaction experiences (store or restaurant), entertainment venues (theater or theme park), or events (interventions, festivals or parties). Designers for these spaces are articulate storytellers who use creative strategies to engage, inform and entertain multiple types of audiences.