Patrick LeMieux Made an Eight-Player Controller 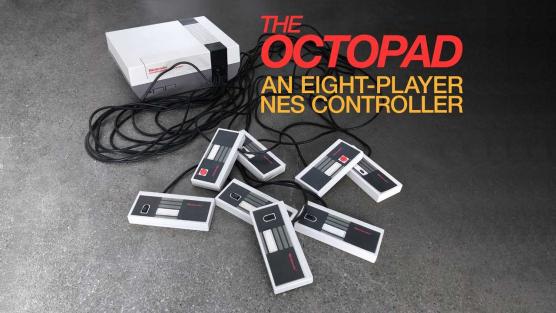 Inspired by his modding class at UC Davis, Patrick LeMieux, assistant professor of Cinema and Digital Media, has been making the rounds at universities, conferences, festivals, and art exhibitions to show a new project — The Octopad.

Instead of one controller with eight buttons, what if there were eight controllers with one button each? Instead of a single-player experience, what if Tetris was a team sport? The Octopad is an alternative interface for the Nintendo Entertainment System that transforms classic titles like Super Mario Bros., The Legend of Zelda, and Tetris (or Yo! Noid, Gremlins 2, and Hatris) into cooperative puzzles and multiplayer parties for four to eight people!

Inspired by the treasure trove of photoshopped interfaces that Richard van Tol and Barrie Ellis posted on the Game Accessibility Forums over ten years ago, the Octopad reimagines a historic platform in the paradigm of one-switch games designed by and for people with limited manual dexterity. Rather than thinking about accessibility as a single-player problem, this controller engages the social, political, and environmental aspects of videogames to change the way we play.

The eight-player controller has been exhibited at the Game Developers Conference in San Francisco, the Smithsonian American Art Museum in DC, and will be in Santa Monica next weekend as an IndieCade Finalist before going to Different Games in Worcester in October, Beta Public in London in November, and Video Games: Cohabitant in Shenzhen in December.

Here is quick trailer for The Octopad.