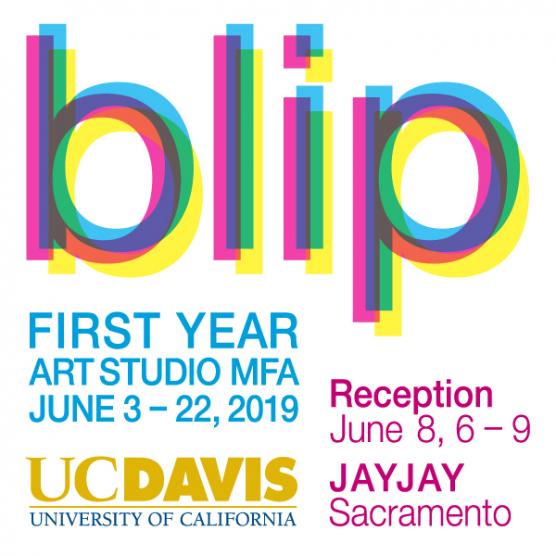 First year MFA art studio candidates are showcased in “Blip” an exhibition at JayJay in Sacramento running June 3 through 22.

“Blip” is open to the public Wednesday through Saturday, 11:00 a.m. through 4:00 p.m. JayJay is also open for appointments. The gallery is located at 5524 B Elvas Avenue in
Sacramento.

Caz Azevedo is creating art from materials found within a personal landscape. Caz (Christopher) conceptualizes the connections they may have with humans and nature to inspire a narrative that empowers the work to have the authority to communicate the story.  Ritually working with cause and effect as a process, adjustments are made based upon the reaction of the last while working in a repetition of mark making and layers, until shapes become forms that manipulate themselves into representational figures.  There is a voice of direction from what is being created that speaks with intentions of an idea, but never a finished plan. Therefore allowing the work to evolve into what it was meant to be.

Zeina Baltagi is a first-generation Lebanese-American artist and educator. Baltagi was born in Stockton and raised between California and Lebanon. Her work explores and exposes the tensions with in identity and social politics. She ritualizes materials into symbols of past memories and current circumstances. The work reveals intimate transformations in relation to lived experiences with physical, emotional, economic and cultural mobility. She holds a B.A. from California State University, Northridge and is a M.F.A. candidate at U.C. Davis. Baltagi has exhibited her work in collaboration with; LADOT, Union Station, Los Angeles Road Concerts, PØST, Los Angeles Contemporary Exhibitions, Torrance Art Museum, bG gallery, Klowden Mann, and numerous university galleries through out California.

Brenda Gonzalez was born and raised in East Los Angeles, California. She earned her B.A. in Art Studio and Japanese Language and Literature at Dartmouth College in 2015 and continued her studies in art through a post-baccalaureate program at Brandeis University from 2017 – 2018. Being far from home during most of her studies, she explores ideas of home and nostalgia through the use of materials and objects typically found in the home in her sculptures and use of digital media.

Dongwan Hong was born in Seoul, South Korea. Through practice, he tries to reveal the various conditions involved in making an artwork in order to rethink the value of art that is freed from its myth of creativity. The work often employs the strategy of disguise, which recreates the boundaries between art and life within the exhibition space such as the gallery or the museum. On the other hand, he reconnects art with daily life by setting a new context outside institutions. In the search for the conditions of art making, he is curious about how it can be applied to other artists and audience members in different social and cultural environments, and how his own condition as well as the society to which I belong are socially and culturally distinct.

Brett Melliar’s formative years were largely spent grinding competitively on soccer fields, basketball courts, and baseball diamonds where a large portion of his identity and core values were formed.  Drawing inspiration from those experiences for his art, Brett works with themes of competition, power, hierarchy, frailty, and mortality. His large, busy, chaotic, in-your-face paintings combine competing images and modes of paint application, seemingly without rhyme or reason, into complex visual statements that transcend into arena’s of contemporary life.

Jessica Eve Rattner’s photography has been featured in exhibitions and respected publications at home and abroad. She is a recipient of the Duke Center for Documentary Studies Essay Prize and was a finalist for the The Arnold Newman Prize in Portraiture.

Julia Edith Rigby is an artist from California. She works in printmaking, sculpture and installation media. She is particularly interested in conversations involving gender, wildness and the environment in the context of the Anthropocene. She has exhibited her work in San Francisco, Los Angeles, New York, Paris and the Netherlands.

Rachel Maryam Smith addresses constructed and glossy notions of domestic and maternal bliss through enticing and prosaic materials in menacing scale. She engages capital transformed into disused collections of familiar objects and how those collections represent the Western girl-woman-crone experience, exemplifying internalized objectification and disabuse from autonomy. Through bromidic materials—such as fabric and fancy buttons collected for idealized, future sewing projects—she engages the shifting interstice between what is ascribed to women and what is seen and what is known about them.