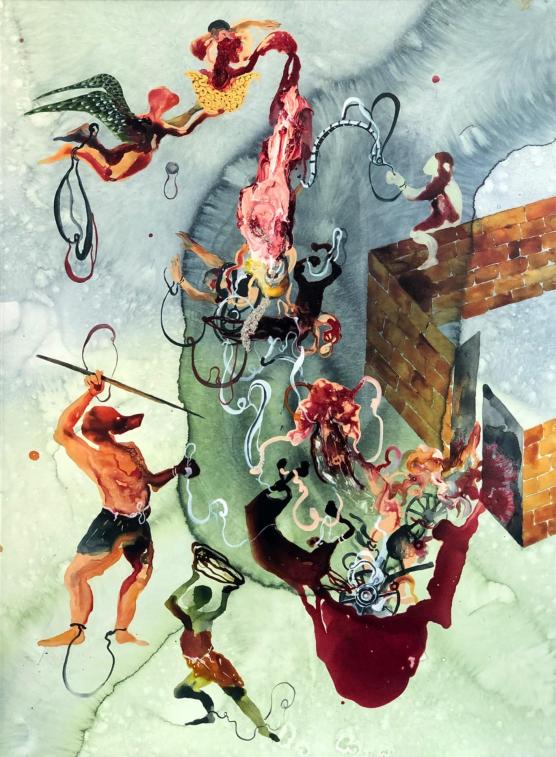 The Elaine L. Jacob Gallery and University Art Collection at Wayne State University is presenting a solo exhibition of the works of Professor Shiva Ahmadi. The exhibition — “Labyrinths” — will run from January 16 to March 20, 2020.

Since 2015, Ahmadi, who received her MFA from Wayne State University, has been concerned with the escalating refugee crisis in the Middle East and Europe and, more recently, the plight of detainees at the US-Mexico Border. Having come to the US from Iran in 1998, the immigrant experience is one that she is keenly aware of and sympathetic to. In a nod to the perpetual state of uncertainty Labyrinths January 16 – March 20, 2020 that so many people are now experiencing, her new works sees a growing tendency towards abstraction, with figures and scenes that are suggestive rather than descriptive. In works such as “Hurdle” (2019) and “Burning Car” (2019), tightly controlled tableaux are increasingly destabilized, with floating masses of rubble and viscera that suggest the aftermath of an explosion, the scattered pieces of what was once whole. Throughout the exhibition, Ahmadi’s paintings speak to the anxiety of dislocation and the insecurities that arise when crossing into unfamiliar (and sometimes unwelcoming) lands.

The exhibition also includes Ahmadi’s animated videos: “Lotus” (2014) and “Ascend” (2017). “Ascend” is inspired in part by the now famous photograph of the Kurdish-Syrian toddler Alan Kurdi, who tragically drowned in the Mediterranean Sea as his family sought to escape the Syrian Civil War. In the seven-minute work, an idyllic and tranquil scene of playful monkeys descends into darkness, with floating bubbles and balloons morphing into bombs—familiar motifs in Ahmadi’s work, akin to the candy-colored confetti that appears in several of her new paintings, which the artist describes as a device for “sugarcoating” ugly truths. These works are exhibited in dialogue with new sculptures from Ahmadi’s “Pressure Cooker” series, first begun in 2016. These striking works have been meticulously decorated; every inch of their rounded surfaces hand-inscribed with delicate intaglio etchings. The works are created from Afghan pressure cookers, sourced from markets in Iran—a reference to real-world tools of violence, and more generally to the domesticity of terror. As with the rest of Ahmadi’s works in “Labyrinths,” the potency of these sculptures lie in the tension between ornamentation and destruction.

On January 16, from 5:30-8:30, there will be an opening reception and Professor Ahmadi will give a public lecture.