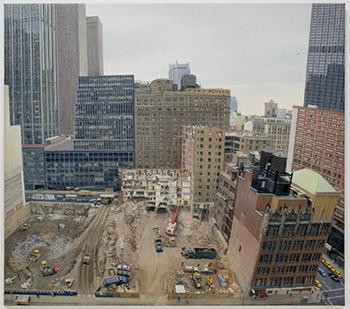 Painter Rackstraw Downes will give the inaugural Betty Jean and Wayne Thiebaud Endowed Lecture at UC Davis on May 6, 2015. He will talk about about painting from observation on site in the contemporary environment. He will also be visiting the studios of current MFA candidates in Art Studio.

The Betty Jean and Wayne Thiebaud Endowed Lecture honors the Thiebauds’ long commitment to educating the eye and hand along with the mind. The endowment will compliment the Art Studio Program’s Visiting Artist Lecture Series, a core component of the Art Studio MFA Program, increasing its ability to invite distinguished artists, critics and curators to the UC Davis campus.

Born in England, the painter Rackstraw Downes received his BA degree from the University of Cambridge in 1961. He has lived and worked in the U.S. since then, taking citizenship in 1980. Downes received a BFA (1963) and MFA (1964) from Yale University. His work is in the permanent collections of The Art Institute of Chicago, The Museum of Modern Art, The Metropolitan Museum of Art, the Whitney Museum of American Art, The Museum of Fine Arts, Houston and the National Gallery of Art, among others. His essays have appeared in The New York Times Book Review, Art in America and Art Journal. In 2009, he was awarded one of the prestigious MacArthur Fellowships. He is represented byBetty Cuningham Gallery, New York.