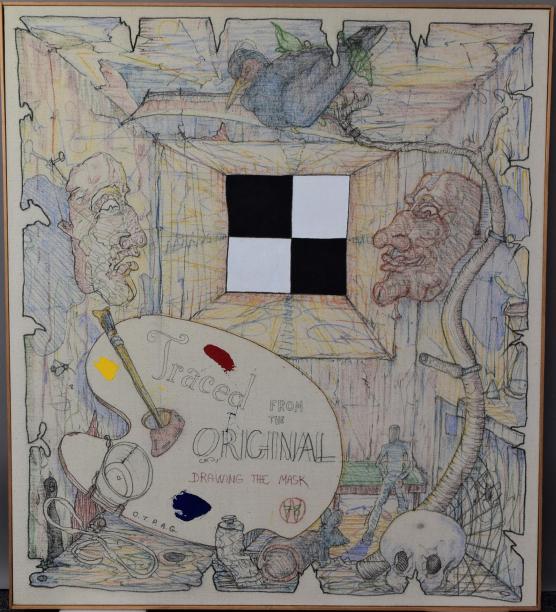 Two new exhibitions at the Hosfelt Gallery and at the di Rosa Center for Contemporary Art honor the self-deprecating wit of Professor Emeritus William Wiley.

At the di Rosa Center for Contemporary Art in Napa, “Fort Phooey: Wiley in the Studio” recreates Wiley’s iconic studio. “Fort Phooey: Wiley in the Studio” captures the sights and sounds of Wiley’s studio with over fifty original works from di Rosa’s collection as well as archival objects on loan from the artist’s estate. The “Fort Phooey” part of the exhibition title is taken from a little-known work in the di Rosa collection titled “Fort Phooey Mandala.” Wiley created the mandala as a meditative exercise in his studio, and he also referred to his studio as “Fort Phooey.” “Being in the studio was like entering into a Wiley artwork,” explains curator Kate Eilertsen. “The effect could be dizzying. Every surface was covered with scrawled wordplay, found objects and other elements of his distinctive visual vocabulary.”

The exhibition draws attention to the legacy of his artistic practice which was rooted in Zen mysticism and play. ”Fort Phooey: Wiley in the Studio” is both immersive and participatory, and will include Wiley’s final painting he was working on prior to his death in April; photographs of him with friends and family; objects from his studio; musical instruments he encouraged studio visitors to play; and works by artists who influenced Wiley.

“Monumental” at the Hosfelt Gallery in San Francisco highlights Wiley’s large painting and drawings, as well as his use of wordplay, a feature of nearly every piece he made. From stream-of-consciousness rambles to pointed critiques, Wiley used humor, puns, sarcasm, and double entendre to address the most consequential issues of our time. Wiley’s interests were rooted in liberal social and environmental concerns as well as philosophy and spirituality, and though frequently political, his work adamantly resists classification into movements or stylistic trends.