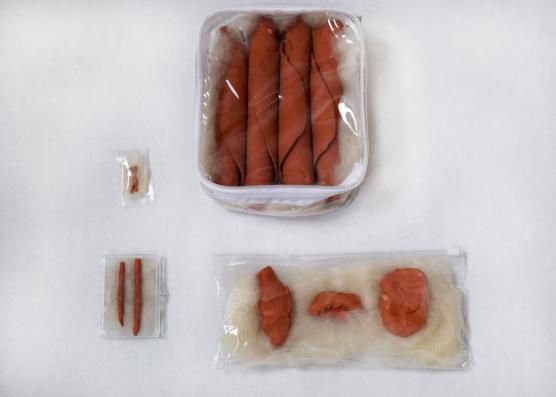 This exhibit brings together four discrete avenues of artistic inquiry to create an exciting and unexpected interplay between disciplines.

Lizalde’s work incorporates sculptures and video performances as forms of autobiography and exploration of identity. Lizalde uses her body and various objects to explore nationalism, assimilation, and social inequality. She is also influenced by disidentification, banal spaces, the home and the domestic, and appropriation of art, spaces, and culture. Lizalde is currently at the University of California, Davis completing a Bachelor in Arts degree in Studio Arts and is minoring in Art History. Her work has been exhibited at Marin Museum of Contemporary Art, SOMArts South of Market CulturalCenter, and Blue Line Arts. She has been a recipient of the Vermont Studio Center Fellowship, the Hopkins Endowment for Studio Art Students, the Crocker Kingsley Art Award, and the Herb Alpert Scholarship for Emerging Young Artists.

Angello’s work is driven by a compulsion to question and to search for the truth. To that end he is interested in the information hidden within an object and transmitted through time. Certain objects are the embodiment of ideological shifts. They act like signposts reverberating consequence along the path of cultural development. His work is about the movement of ideas as they shape the material world. More specifically the work seeks to explore the transmutation of ideology such as divisive gender norms, capitalism and its progenerate effects, tribalism, family history and spirituality. There are no predetermined conclusions which he hopes to convey rather, it is his hope to create a compelling catalyst for analysis and critical discourse. His current body of work, American Death Drive, explores intimate and familiar moments as a personification of a much larger trend.