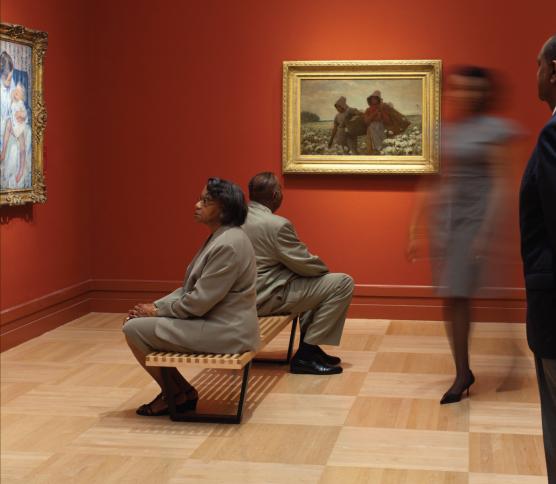 American cultural institutions are an integral part of the broader discussion of racism taking place in our society. Museums are powerful spaces for communicating cultural values, including racially based notions of cultural difference. Can the museum be a space of anti-racism, and can the discipline of art history help to achieve that?  If so, what are the challenges and concerns involved? The 2021 Templeton Colloquium focuses on these questions to better understand the relationship between the display of art and racial privilege. Speakers will include Professor Bridget Cooks, UC Irvine, author of Exhibiting Blackness: African Americans and the American Art Museum (2011), and Dr. Susan Mullin Vogel, a curator, filmmaker and expert on African art whose most recent book is El Anatsui: Art and Life (revised and expanded Second Edition, 2020). After brief presentations by each of the speakers, a conversation will be moderated by  Michael Yonan, art history professor and the Alan Templeton Endowed Chair in European Art, 1600–1830.

Susan Vogel’s talk, “The Accidental Plan: African Art in American Museums after the Civil Rights Movement,” will examine the wave of African art collections and blockbuster exhibitions mounted by mainline American art museums as they sought to respond to the civil rights movement. Ironically, it was enabled by countless single individuals making small personal decisions in Africa and Europe as well as in America. It was a happenstance that looks like a grand plan.

Susan Vogel lives in New York, grew up in Beirut, and has lived for long periods in a village in Ivory Coast, and a medieval city in Mali. She is internationally recognized as a curator and African art expert. She has published many books, and written a few, founded an art museum in New York – that survived her departure - and directed two museums. She then successfully completed two years as M.F.A .student at New York University’s Tisch School of the Arts, and became a filmmaker.

Bridget R. Cooks’s “Museums as Sites for Cultural Change,” will discuss art, inequality and museums in the age of Black Lives Matter. She analyzes Blackness in mainstream art museums in the 20th century and connects it to current pressures museums face today to decolonize their spaces and rethink their functions.

Professor Cooks fills a joint appointment in the department of African American Studies and the department of art history at UC Irvine. Cooks’ research focuses on African American art and culture, Black visual culture, museum criticism, film, feminist theory and post-colonial theory. In 2002 she earned her doctorate degree in the Visual and Cultural Studies Program at the University of Rochester. She has received a number of awards, grants and fellowships for her work including the prestigious James A. Porter & David C. Driskell Book Award in African American Art History, and the Henry Luce Dissertation Fellowship in American Art. She has also curated several art exhibitions including “The Art of Richard Mayhew” at the Museum of the African Diaspora, San Francisco, 2009-2010; Grafton Tyler Brown: Exploring California (2018) at the Pasadena Museum of California Art; and Ernie Barnes: A Retrospective (2019) at the California African American Museum.

Presented by the Department of Art and Art History, this series is made possible by the generous support of Alan Templeton (B.A., ‘82) and co-sponsored by the Jan Shrem and Maria Manetti Shrem Museum of Art. The lecture is free and open to the public.

Read more about the Templeton Colloquium in the Letters and Science News.

WHERE: Online, free and public to all.

Media contact: Michael Yonan, professor of art history and The Alan Templeton Endowed Chair in the History of European Art, 1600–1830