Michael Yonan is a scholar of early modern European art, with special interest in the arts of eighteenth-century Austria, Germany, and Scandinavia.  He is also interested broadly in the decorative arts, rococo design, material culture theory, and art historical methodology and historiography.  He has received fellowships from the Getty Research Institute, the Mellon Foundation, the Kress Foundation, the Fulbright Program, and the Swedish Collegium for Advanced Study, Uppsala.  In 2019 he was visiting guest professor at the Institute for Culture and Aesthetics, Stockholm University, Sweden.  Recently he participated in the research project Powerful Presences: The Sculptural Portrait, organized by the University of Copenhagen and Thorvaldsens Museum, Denmark.  For Bloomsbury Academic Press he edits the book series The Material Culture of Art and Design.

Arts of the Rococo examines the highly ornamental arts of the rococo, arts between 1710 and 1770, including painting, sculpture, architecture, interior design, furniture, metalwork, and ceramics. An art of sensual surfaces, it was also an art that generated new relationships between art and its publics.  The course concentrates on developments in France and Germany, but does so in dialogue with art from China, India, the Middle East, and the Americas, and critically examines the place of decoration in society.

Art in the Age of Revolution, 1750-1850 explores European art from approximately 1750 to 1850, focusing on art made in conjunction with major social transformations that have given this era the name “the Age of Revolutions.”  Beginning with art made during the French Revolution in 1789, it then broadens to explore art from Italy, Britain, Spain, and Germany.  In addition to its primary theme of art and politics, the course also includes discussions of the Grand Tour, European images of people of color, the birth of the modern art museum.

Impressionism and Post-Impressionism focuses on art from two movements that have produced some of the most famous paintings ever made.  Artists discussed include Manet, Monet, Morisot, Cassatt, Degas, Renoir, Cézanne, Seurat, Van Gogh, and Gauguin.  A special component of our study will be the analysis of gender as it relates to the depiction of modern life, as well as of artistic techniques, subject matter, and class concerns.  This course seeks to return to Impressionism something of its original edginess, to place it in the social and material contexts of nineteenth-century Europe and to understand how it became associated with modernity.

Ornament and Ornamentation Art history has struggled with ornament ever since Modernism promoted a distrust of it that has contributed to the perception that it is frivolous and unnecessary.  Yet for many cultures, ornamentation is a fundamental component of art.  The seminar’s goal will be to understand ornament as a bearer of meaning and to develop practical frameworks for its interpretation, done largely through reading classic texts on the subject (Loos, Gombrich, Grabar) and following them with case studies of specific moments in ornament’s history.  The seminar also scrutinizes the apparent boundaries between the decorative and “high” arts, theories of art and craft, and notions of figuration and abstraction.

Global Objects This seminar considers the phenomenon of objects on the move in the early modern world, defined as approximately 1550 to 1850.  Recent scholarship has shown that the globalized world of which we are a part is not new.  Human beings have engaged with each other across long distances via trade and other forms of communication since prehistory.  Art historians have devoted much attention to the ways in which cross-cultural exchange influenced the arts.  We will read a selection of recent scholarship on these subjects, as well as theorize the concepts of “mobility” and “cultural hybridity” more broadly.

Methods of Art History is a close study of selected recent developments in interpretive methodology used by art historians and other analysts of visual culture and the place of those developments within art history’s history and in the larger field of social, cultural and historical analysis. Open to graduate students and advanced undergraduates.

“The Materiality of Porcelain and the Interpretation of Ceramic Art.”  Journal of the Walters Art Museum 75 (2021).

“Material Transformations: Thinking about Objects and Spaces at the Wieskirche.” Journal of Art Historiography 9 (9/MY1) (December 2013): 1–13.

“The Wieskirche: Movement, Perception, and Salvation in the Bavarian Rococo.” Studies in Eighteenth-Century Culture 41 (2012): 1–25.

“Porcelain as Sculpture: Medium, Materiality, and the Categories of Eighteenth-Century Collecting.”  In Sculpture Collections in Europe and the United States, 1500–1930: Variety and Ambiguity. Ed. Inge Reist and Malcolm Baker (Leiden: Brill, 2021), 174–193.

“The Uncomfortable Frenchness of the German Rococo.” In Rococo Echo: Art, Theory, and Historiography from Cochin to Coppola, ed. Melissa Hyde and Katie Scott.  Oxford University Studies in the Enlightenment (Oxford: Voltaire Foundation, 2014), 33­–51.

“Kunsthistorisches Museum / Belvedere, Vienna: Dynasticism and the Function of Art.” In The First Modern Museums of Art: The Birth of an Institution in Eighteenth- and Early Nineteenth-Century Europe, ed. Carole Paul (Los Angeles: Getty Publications, 2012), 167–189.

“The Suppression of Materiality in Anglo-American Art-Historical Writing.” In The Challenge of the Object/Die Herausforderung des Objekts. Proceedings of the 33rd Congress of the International Committee of the History of Art (CIHA), Nürnberg, 15–20 July 2012. Ed. Georg Ulrich Großmann and Petra Krutisch. (Nürnberg: Verlag des Germanischen Nationalmuseums, 2014), I:63–66.

Room 164, Everson Hall
meyonan[remove-this-and-replace-with-at]ucdavis.edu
Back
This item appears in: 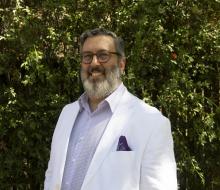